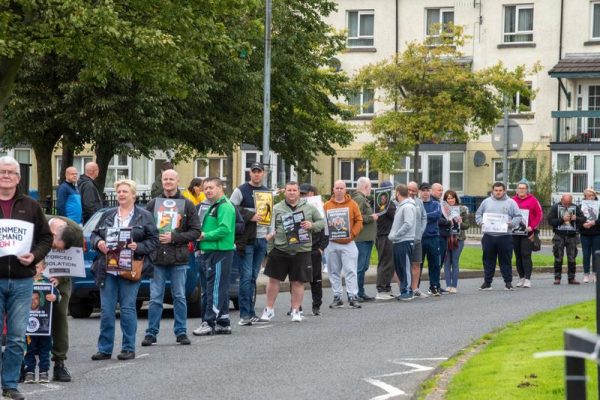 A 19-YEAR-OLD woman has appeared in court after breaching bail conditions by attending a protest in Derry in support of republican prisoners earlier this month.

Isobella Ni Shuilleabhain of Ashlawn in Letterkenny, Co Donegal, is currently banned from being within 100 metres of any protest as part of bail terms in relation to charges of using disorderly behaviour as well as assaulting and obstructing police.

The Irish News reports that the allegations are linked to an alleged incident at The Diamond in Derry October 17 last year.

During a special sitting of Dungannon Magistrates Court yesterday a police officer explained Ni Shuilleabhain contravened bail by taking part in a protest at Free Derry Corner on Saturday, March 6.

“This is commonly referred to as a ‘white-line protest whereby supporters of the IIrish Republican Prisoners Welfare Association (IRPWA) gather in the Bogside area and stand on the road waving flags and banners,” he said.

The officer added the incident captured on bodyworn cameras by a police evidence-gathering team showed: “Some 40 person were in attendance and the protest breached current public health regulations regarding the Covid-19 pandemic.”

Ni Shuilleabhain was identified standing in the middle of the road.

The officer opposed bail and said there were also concerns she may not attend future court sittings as she resides outside the jurisdiction.

A defending barrister confirmed the breach was accepted and argued the charges against his client were not of the “greatest gravity” to justify remanding her into custody.

The barrister said he could not understand why police did not charge his client with breaching coronavirus restrictions if that was the issue, although accepted this may come in due course.

He told District Judge Michael Ranaghan: “Your views on coronavirus breaches are well known and well publicised and I accept that is something which may cause difficulty. However, I am requesting the ban on attending protests be removed from bail conditions as this criminalises my client’s right to free speech and public assembly.”

Judge Ranaghan ruled: “I will readmit the defendant to bail, but to punish her for breaching coronavirus regulations I am retaining all conditions as they currently stand.”

He also ordered Ni Shuilleabhain to sign bail of £500 and adjourned the case for mention at Derry Magistrates’ Court next Wednesday, March 24.