THE family of a Derry man shot dead on Bloody Sunday have lodged a legal challenge against a decision not to charge a former soldier with his murder.

Bernard McGuigan, known as Barney, was one of the 13 people killed when the Army opened fire on civil rights demonstrators in the city in 1972.

His family are challenging the decision not to prosecute an ex-paratrooper known as Soldier F.

He has been charged with murder over two deaths, but not Mr McGuigan’s.

In 2019, the Public Prosecution Service determined Soldier F would be prosecuted for the murders of James Wray and William McKinney.

That decision was challenged by a number of victims’ families, but last year the PPS said there would be no further prosecutions.

The McGuigan family said they have issued judicial review proceeding after “an exhaustive process between our solicitor and the Public Prosecution Service (PPS) over the last two years”.

They said the PPS has now confirmed that an undertaking by the attorney general, which meant testimony given to the most recent inquiry into Bloody Sunday cannot be used in criminal investigations, did not apply to oral evidence given by Soldier F to the earlier Widgery Tribunal, held in 1972.

“While we welcome that formal confirmation at last, the PPS still contend, in effect, that F was acting “under orders” to give evidence at Widgery,” the family statement said.

Widely regarded as a whitewash, the 1972 Widgery Tribunal sat for three weeks, with the final report published on 18 April of that year.

But in 2010, the Saville Inquiry into the events on Bloody Sunday established the innocence of all those killed and wounded.

Lord Saville’s 5,000-page report stated none of the casualties posed a threat of causing death or serious injury and that soldiers had lost their self-control. 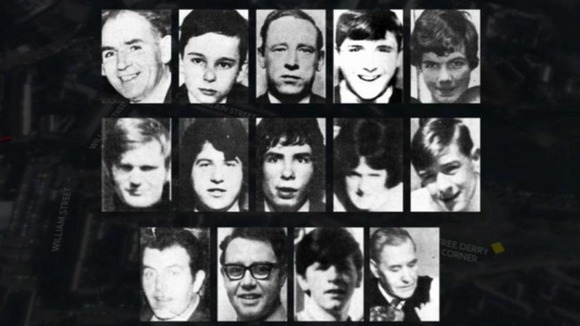 The McGuigan family statement added: “As far as we are concerned the evidential test is more than met in respect of the murder of our father in such callous well-known circumstances, witnessed by many including other soldiers.”

Mr McGuigan was a painter and decorator.

He was shot at the Rossville Flats area as he went to the aid of 31-year-old Patrick Doherty, who was also shot dead on the day.

The 41-year-old had been waving a handkerchief or towel when he was hit in the head by a bullet, killing him instantly.