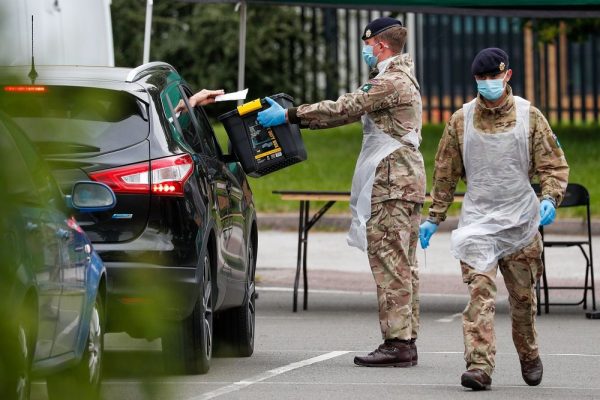 MEMBERS of the British military are to be brought in to help medical staff in Northern Ireland in the fight against Covid-19, BBC News NI is reporting this afternoon.

It is understood Health Minister Robin Swann asked the Ministry of Defence (MoD) to help out, primarily at a number of hospitals across NI.

Some 100 medically-trained military personnel are expected to be deployed.

Those brought in will assist nursing staff and help on the wards in a move designed to ease the pressure on staff.

In the past, the use of the British military in the North of Ireland has provoked controversy.

When it was announced last April that the health minster had made requests for military help, Sinn Féin’s Michelle O’Neill said Mr Swann had taken that decision unilaterally.

However, she later said her party would not rule out any measure necessary to save lives.

While military help has already been used during the pandemic to transport equipment and patients, this is the first time military staff will be used in hospitals.

It is thought the first British military staff will be made available as early as next week.

As of Wednesday, there were 832 people in hospital in Northern Ireland with coronavirus, of whom 67 were in intensive care, with 57 were ventilated.

A further 22 people with coronavirus died, bringing the Department of Health’s total to 1,671 while there were 905 new cases.

Sadly, one of those deaths was recorded in the Derry City and Strabane District Council area in the past 24 hours.

The North of Ireland is in the fourth week of a six-week lockdown, but the restrictions could be extended.

The Department of Health has yet to comment on the BBC News NI story.