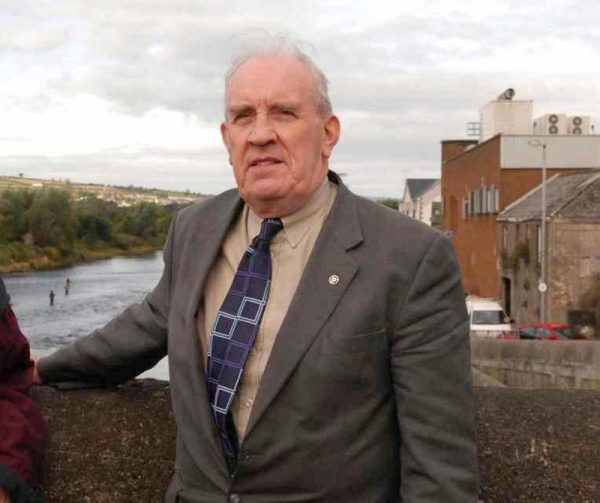 Mr O’Kane (85) represented the people of Strabane for 32 years, serving as Chair of Strabane Council for three terms before eventually leaving politics in 2014.

Mayor Tierney extended his deepest condolences to Mr O’Kane’s family and acknowledged his dedication to his beloved Strabane.

“This is a sad day for the people of Strabane, James O’Kane was committed throughout his life to promoting and developing the town and improving the lives of everyone who live there.

“For over three decades he championed Strabane in his role as an independent councillor, where he became synonymous with local politics.

“He took on the role of representing the entire community and worked tirelessly on behalf of all his constituents regardless of their political or cultural background.

“He will be remembered for his devotion to both his constituency work and his family, his kindness and his no nonsense approach to local politics which won the confidence of the local community and led to him topping the polls in Strabane on two occasions.

“He served as Chair of Strabane Council for three terms, during which time he was a fantastic ambassador for the town, and a great advocate for positive change.

“After his retirement in 2014, he continued to dedicate much of his time to acting on behalf of anyone in need of support.

“I want to extend my personal condolences to Mr O’Kane’s family, his daughters Majella, Dolores and sons Declan and Jeffrey, and also to all the people of Strabane who have lost a much loved and valued member of their community.”