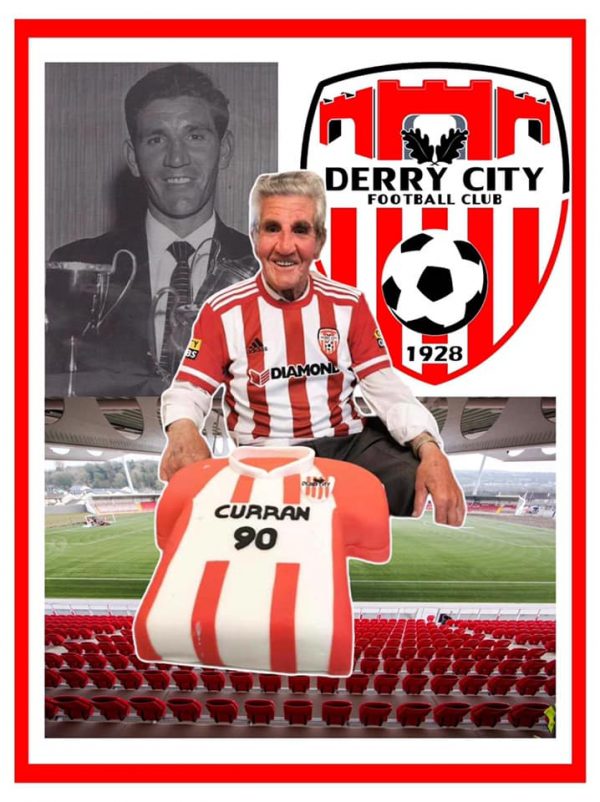 THERE is sadness across Derry over the passing of Candystripe legend Willie Curran.

Willie passed away last night at the age of 90.

“Willie was signed as a 14 year old in 1944, marking the start of a lifetime association with his beloved local club spanning over 7 decades.

“In 2018 Willie received an award for Lifetime Voluntary Service to DCFC.

“In 2019 he became the first player to be inducted in the Club’s Hall of Fame.

“Willie will be missed by his family and friends, the Derry City family, St Eugene’s Cathedral, Derry Diocese parish community, Brooke Park Bowling Club and by so many others across Derry.”

Willie made his debut for the senior side in the 1950/51 season and soon made the centre-half position his own.

He played in the famous 1954 Irish Cup final series in which it took Derry City three games to overcome Belfast rivals Glentoran.

The first two games ended in draws, before Derry won the third game 1-0.

The three games drew an overall attendance of 91,000.

Willie remained at the Brandywell for another few seasons before signing for Sligo Rovers in 1957.

However, after his playing career was over, Willie was once again closely associated with Derry City and has fulfilled a number of voluntary roles at the club through the decades, during their time in both the Irish League and the League of Ireland.