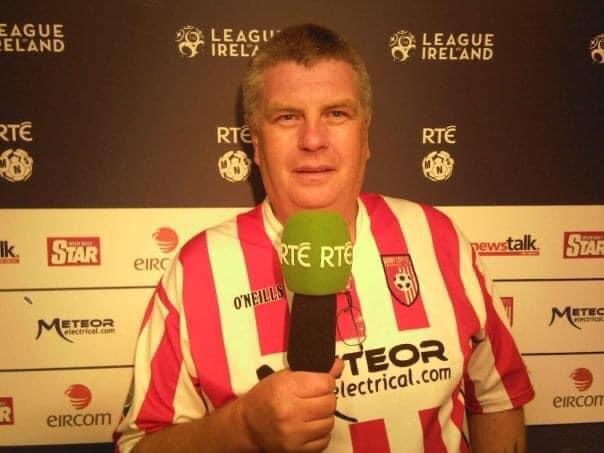 Hugh Curran who has sadly passed away

DERRY City FC says it is “saddened” to learn of the passing of Hugh Curran.

Hugh was a very well known supporter at both home and away games and was well known by the wider League of Ireland community.

As much as he was a big supporter, Hugh was also a valued volunteer.

No job was too big or too small; whether it was moving advertising hoarding on and off the pitch or acting as Santa Claus for deliveries of toys.

No matter what the event, be it a Golf Classic or Fans Forum, Hugh was always willing to roll his sleeves up and lend a hand.

Hugh served as Supporter Liasion Officer(SLO) for a number of years, acting as a point of contact between the club and supporters.

He was very passionate about ensuring fans of other clubs felt welcomed and valued at the Brandywell.

There are many stories from supporters of other teams as to how Hugh went above and beyond during their time in the city.

In particular, the stories of Hugh looking after European visitors showed what is the best amongst the Candystripe support base.

Often tasked as the minibus driver when there were insufficient numbers travelling for a full coach, Hugh ferried Derry fans all over the island.

From Cork to Coleraine and everywhere in behind, Hugh was behind the wheel and ensuring City fans got to and from the games safely.

Many younger fans attended their first away games on a bus driven by Hugh.

“The entire club is devastated by the awful news of Hugh’s passing.

“He epitomised everything that Derry City FC stands for and Hugh is simply irreplaceable within our club.

“As Supporters Liaison Officer he galvanized our fan base, driving buses full of supporters the length and breadth of the country to follow the team.

“Nothing was ever too much to ask of him. The management, players, staff and supporters are deeply saddened at Hugh’s passing and our wish to extend our deepest condolences to his family at this terrible time.”

City say that “all at the Football Club wish to pass on our sympathies to Hugh’s friends with the Derry City community and most especially to his family”.