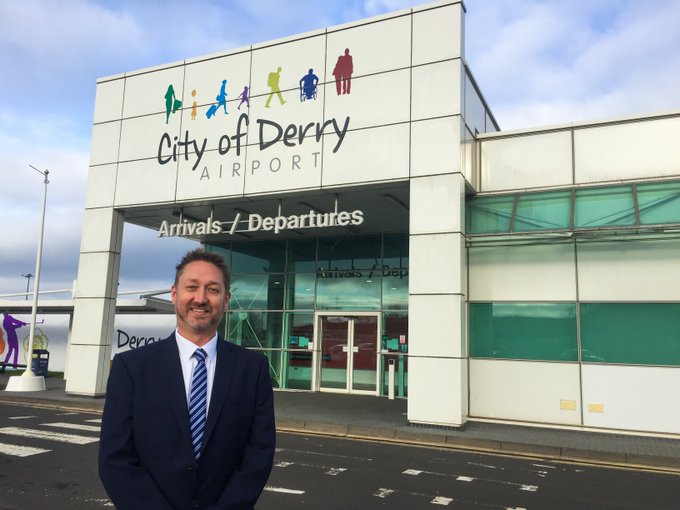 Mr Harrison said the financial support package of over £1.2m, announced earlier today by the Department for Infrastructure on behalf of the NI Executive, followed weeks of negotiations and collaborative working between the Government ministers and officials, the CODA Board and Council officials.

The announcement comes following emergency temporary funding provided by the UK Department for Transport and the NI Executive earlier this year, to allow the airport to remain open during the early months of the pandemic.

This additional funding announced today will allow the facility to remain operational up until March 2021.

Mayor of Derry City and Strabane District Council Cllr Brian Tierney said news of the financial support was excellent news for the airport and the Council.

He said: “I am delighted that the NI Executive, through the Department for Infrastructure, have acknowledged the significance of the airport to the local economy and agreed to assist in lessening the financial impact it places on the Council and ratepayers.

“Today’s announcement is really good news for everyone associated with the airport.

“This funding will provide some short-term stability during this difficult economic period and allow routes to continue to operate for those who are needing to travel, as well as allow for the continuation of important connectivity and linkages between the North West City region of Ireland and London.”

“The announcement symbolises the importance with which central government recognises the important role played by CoDA towards connectivity and regional development in this region and we are delighted that they are supporting us as we continue to deal with the pandemic, plan for the recovery phase and future investment.”

He said: “Today’s announcement of short term financial support from Central Government is fundamental from a strategic growth perspective.

“It underpins much of what CODA has contributed towards the connectivity of this region and will assist us with our overall plans for COVID recovery, regional development and investment plans right across the North West region.”

He added that CODA and Council are continuing conversations with the NI Executive in relation to medium to long-term financial support for this important regional asset beyond March 2021.

For more info on the City of Derry Airport visit: www.cityofderryairport.com