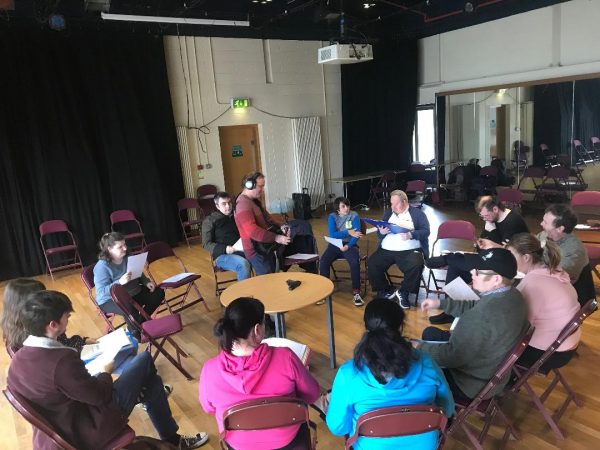 Stage Beyond cast members in rehearsals for Hamlet, Prince of Derry, in the studio at the Millennium Theatre prior to the recent lockdown.

Stage Beyond Theatre Company have adapted and rose to the challenges posed by Covid 19 this year by landing a prestigious cultural award and receiving international critical acclaim for a play aired on RTE Radio.

The Derry based theatre company for adults with learning disabilities are one of eight arts organisations across the UK selected for the Achates Philanthropy Prize UK which seeks to reward artists who have produced outstanding theatre.

In June of this year, the company were due to begin a tour of Ireland’s leading theatre venues with their production of Hamlet, Prince of Derry, but the restrictions to reduce the spread of Covid 19 led to a full cancellation of those plans.

Determined that all their hard work would not be in vain, they contacted RTE Radio who attended rehearsals and commissioned the play for their Drama On One series, which aired on July 26th.

The play went on to receive rave reviews in the Sunday Times, Irish News, Belfast Telegraph, Newsletter and Arts Shows throughout the country.

Mayor of Derry City and Strabane District Council, Councillor Brian Tierney, congratulated them on their success.

“This has been a challenging time for all theatre companies who have been unable to perform in front of audiences during the current pandemic,” he said.

“I have been particularly impressed by how Stage Beyond have rose to those challenges and adapted their performance for a radio audience and I was delighted to see how well their production of Hamlet, Prince of Derry, was received in the national and international media.

“I’d like to congratulate the company on receiving the prestigious, UK wide, Achates Philanthropy Prize and I look forward to seeing them back performing for live audiences in the future.”

Stage Beyond cast member Bryan Sutherland (Claudius) discussing the script with director Conall Morrison while rehearsing ‘Hamlet, Prince of Derry’ prior to lockdown

Dee Conaghan, Stage Beyond Artistic Director added: “We were honoured to be in such talented company in being shortlisted for the award and absolutely thrilled and delighted to be selected as the Northern Ireland winners.”

The company are now concentrating on their up and coming festive show piece ‘Christmas On The Stage Beyond Tree’ which will be a five part performance that viewers can watch online.