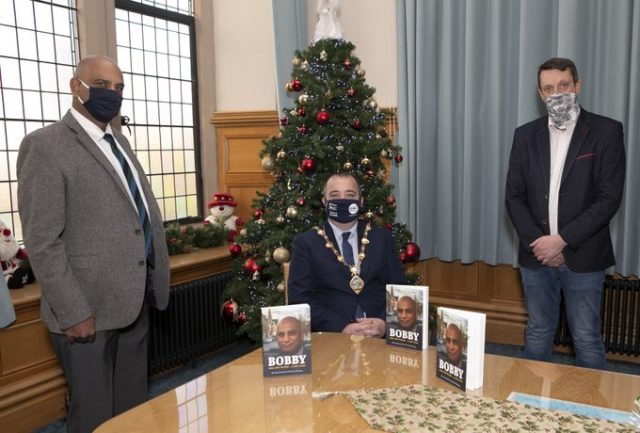 MAYOR of Derry City and Strabane District Council, Cllr Brian Tierney, has welcomed former international cricketer Narasimha ‘Bobby’ Rao to the Guildhall and received a copy of a new book about his life.

It details the life of Bobby – a former Indian Test cricketer who moved to Strabane in 1980 where he has since played a pivotal role as a community worker.

Born in Hyderabad, the book reflects on Bobby’s international and domestic cricket career, his commitment to developing stars of the future, and his time as both a player and a coach with the Irish squad.

The book also details Bobby’s achievements off the cricket field, including how he established the Strabane Ethnic Community Association after he ​was the victim of racial abuse, and how his community work earned him an MBE in 2011.

Mayor Tierney said that the book will be a fascinating read for many in Strabane and beyond.

“Bobby’s life story is really incredible, not just in all that he achieved in his cricket career, but in everything that he has done through his work in the community.

“I have had the pleasure already as Mayor of visiting the Strabane Ethnic Community Association and I know how valuable it has been, and continues to be, for thousands of people.

“Bobby’s selflessness and his passion are qualities he has shown both in his community work and his cricket career, and we are so fortunate to have such a talented sportsman within our district who has reached the pinnacle of cricket.

He continued: “Bobby is a valued adopted son of Strabane and I would encourage everyone to pick up a copy of this book and find out more about his life story.

“It’s guaranteed to be a fascinating read and one that I am looking forward to getting stuck into!”

‘India and Ireland… A Love Story’ is currently on sale on Amazon in both print and e-book.

Copies are also available to purchase from various retail outlets, priced at £16 (€20).