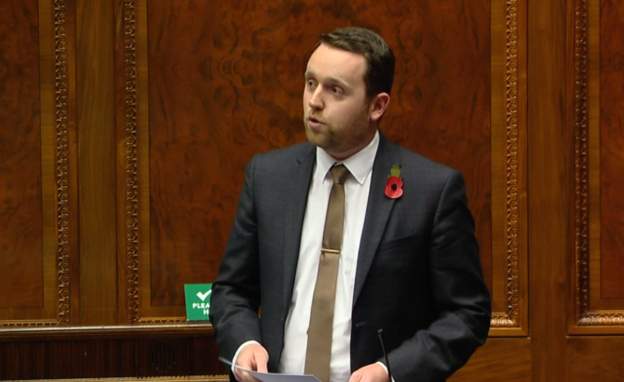 We need to live alongside virus – Middleton

MLAs have this afternoon in the Assembly been discussing legislation that came into operation on 16 October and ceases to function at midnight this Thursday.

The Executive has yet to announce whether the lockdown will lifted at midniht on Thursday over if intends to extend the restrictions for a further two weeks.

One possible plan under discussion is to allow restaurants and cafes to open but without alcohol on sale to the public.

Hotels could reopen but only to guests.

‘Wet’ pubs under the plan would remain shut for a further two weeks.

During the debate DUP MLA Gary Middleton says that clarification on the wearing of facemasks in places like cafes, restaurants, taxi and the like was welcome and has increased the level of compliance.

The Foyle representative also welcomes a 70% reduction in the infection rate in Derry and Strabane.

“There are a lot of varying views across the chamber in terms of the way we go forward,” Mr Middleton said.

“We need to get to a point where we can co-exist alongside the virus,” he adds.

Martina Anderson of Sinn Féin said the virus was “out of control” prior to the introduction of the Covid regulations in the Derry and Strabane area, adding that people “did respond and did react and they did curtail” the disease.

She welcomed the fact there has been a 70% reduction in the virus in the area in recent weeks.

“Most of us know someone who has ended up with the virus, or is self isolating, or who ended up in hospital,” added the Foyle MLA.

“There is no good Covid, there is not good coming out of it” said the MLA, adding that the assembly’s motto should be “to build back better” for citizens.