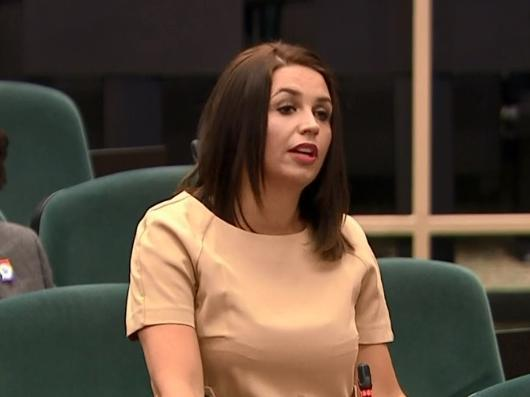 POLICE are considering a request to investigate issues around the mistaken payment of Covid relief funds.

Three Sinn Fein activists, including former Foyle MP Elisha McCallion, have resigned after it emerged there was a delay in repaying unsolicited £10,000 grants which were wrongly paid into party accounts.

The grants paid into the Sinn Fein accounts were not paid back until earlier this week.

“As party leader I wish to acknowledge and apologise for these failures,” she added.

Mrs McDonald said she has accepted the resignation of three party activists including former Foyle MP Elisha McCallion and officials in Upper Bann and West Tyrone.

In a separate statement, Ms McCallion said she has also resigned from the Seanad.

“I fully accept that as a named signature on the account that I should have taken extra steps to verify this situation before it was brought to my attention on Tuesday,” she said.

“I apologise unreservedly for the poor judgement I showed in relation to this and therefore, last night, I spoke to the party leader and tendered my resignation as a member of Seanad Eireann with immediate effect.”

DUP Foyle MLA Gary Middleton said he has written to PSNI Chief Constable Simon Byrne to ask for police to investigate whether “a potential offence” may have been committed.

“The police need to examine if failure to return these grants for almost seven months – especially if it was a conscious decision on the part of those involved – constituted a criminal offence,” he said.

“I have written to the PSNI asking them to investigate whether a breach of the law took place under Section 24A of the Theft Act and subsequent amendments to it including the offence of retaining a wrongful credit.

“It is important that this is investigated in a robust and appropriate fashion to uphold public confidence.”

A PSNI spokeswoman said: “We can confirm a communication was made to the Chief Constable in relation to Covid-19 grant money.

“We are considering the matter as to whether a criminal investigation is required.”