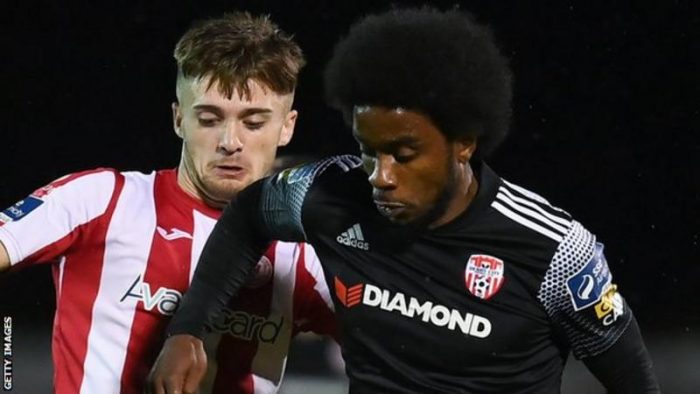 A late Ryan De Vries goal grabbed a 1-0 victory for Rovers and made it two consecutive Premier Division defeats for the Candystripes.

Having conceded two injury-time goals to lose 2-1 to Bohemians on Friday, it was an 87th header that cost the City at the Sligo Showgrounds (kick off 7.45 pm).

Walter Figueira missed a glorious chance to give the visitors the lead 12 minutes from time when he hit the post from close range.

After tonight’s result, uDerry stay seventh in the league table.

Declan Devine’s men have now gone four Premier Division games without a victory and have only scored one goal in that run – two draws and two defeats.

Rovers, who started the match one place above their derby rivals, move up to fourth with what was a second win of the season over the Brandywell outfit.

In a match attended by 100 home supporters, Alex Cooper set up the winner with a deep cross from the left and De Vries drifted into space at the back post to head home past Derry goalkeeper Peter Cherrie.

Having gone three games without finding the net, there were a few hairy moments for Sligo early on.

Rovers’ hearts were in mouths again five minutes later when their defence allowed another Hamill corner flash across the face of the home goalmouth.

While Jack Malone fired Derry’s next effort across the target 22 minutes in after good work from Figueira through the middle.

Rovers slowly grew into this tie but struggled to find that telling decisiveness in the final third.

Ronan Coughlan thought he might have had a spot kick on the half hour when he felt the hand of a Derry defender on his back as he challenged to get on the end of a Regan Donelon cross.

Referee Neil Doyle didn’t entertain Sligo’s limited calls for a penalty before the ball finally fell to Jesse Devers. The Ballina native slicing his half volley high and wide over Pete Cherrie’s goal.

Rovers’ top scorer Coughlan should have had his fifth league goal of the season nine minutes from the break.

The busy Devers saw his initial volley pushed away by Cherrie. The ball landed to Coughlan who, from three yards, could only strike it off the already grounded goalkeeper.

Former Derry attacker Junior showed some silky touches to pull off a series of one-twos with Coughlan on 54. The latter squared for Niall Morahan who dragged the ball wide of Cherrie’s post with an unconvincing strike.

Cherrie got in the way of Donelon’s attempt shortly after when the full back aimed for the bottom corner. While City skipper Conor McCormack couldn’t make the most of the space in front of him when he shot wide from a quickly taken free 30 yards out.

Derry substitute Steven Mallon went close from the angle on 64 as both sides continued in search of an opener.

It was then the visitor’s turn to spurn a clear goal-scoring chance when the sliding Figueira knocked the ball against the woodwork, after Ibrahim Meite’s squared ball had left the Londoner facing an empty net.

Declan Devine’s players were to regret that miss when Sligo struck for the winner soon after.

City failed to clear their lines as Alex Cooper’s swerving cross was allowed make its way towards Cherrie’s back post. De Vries on hand to nod home for his third goal of the year.