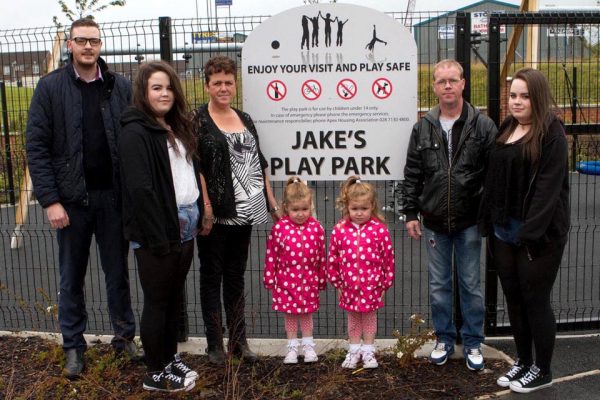 Christopher Doherty (left) Apex Property Services Officer, with members of Jake’s family at the opening of Jake’s Play Park in 2015

SINN Féin Councillor Sandra Duffy has slammed vandals who have damaged a play park in Shantallow named in memory of a young child from the area who tragically died in 2013.

The children’s play park was named in memory of Jake Murphy at Racecourse Road and opened in 2015 by Apex Property Services.

The 11-year-old was playing at a building site near his Shantallow home in July 2013 when he collapsed and died.

Jake had a pre-existing heart condition.

Said Cllr Duffy: “It is absolutely disgraceful that this vandalism is taking place.

“I have reported to Apex the damage that has been caused to Jakes Park at Racecourse Road.

“Sadly, this is the third time this play park has been targeted in the past twelve months.

“Apex have said they hope to get it repaired as soon as possible.

“I would urge local people to please be vigilant and keep an eye on the park in the times ahead.”