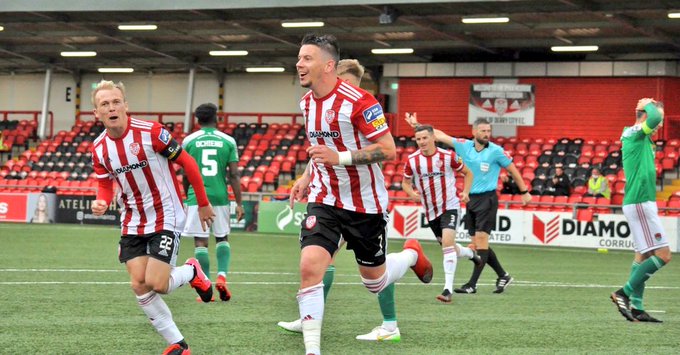 Adam Hammill wheels away after putting the Candystripes in front. PIC BY KEVIN MOORE

DERRY City moved clear of the League of Ireland’s bottom two with a much-needed 3-1 win over Cork City.

Two quick-fire goals at the start of the second half at the Ryan McBride Brandywell Stadium on Friday evening saw Declan Devine’s men come from behind to see off a spirited Cork City side.

The Candystripes fell behind early as a mistake from goalkeeper Peter Cherrie allowed Joseph Olowu to put the visitors in front after three minutes.

But Derry fought back with two goals in three minutes from Walter Figueira and Adam Hammill early in the second half.

The result sees Cork and fellow strugglers Finn Harps drift further away from the teams above them.

The 3-1 win will bolster the Derry side as next up is an way trip to Lithuania on Tuesday, August 25, where they will take on FK Riteria in the capital Vilnius in a preliminary round of the Europa League (kick off 5 pm).

It was a lacklustre start from Derry who gifted the visitors an opener as Cherrie failed to collect Kevin O’Connor’s floated free-kick, allowing Arsenal loanee Olowu to turn the ball into the empty net.

The hosts did improve having fallen behind as Jack Malone forced a good save out of Cork keeper Mark McNulty.

Ibrahim Meite struck the outside of the post as Derry pressed but half-time arrived with the Candystripes still trailing.

A rejuvenated side re-emerged after the break and Derry found themselves ahead eight minutes after the restart, first equalising through Figueira who pounced after McNulty fumbled a cross.

The lively Meite was central to Derry’s forward play and it was his run and shot that forced a good save out of McNulty three minute later, only for Hammill to turn in the rebound.

Cork pressed for an equaliser which nearly arrived five minutes from time when Connor Simpson’s powerful header was kept out by an impressive Cherrie save.

The win was sealed with less than a minute of injury-time remaining when substitute Akintunde struck low into the bottom corner to secure the three points.