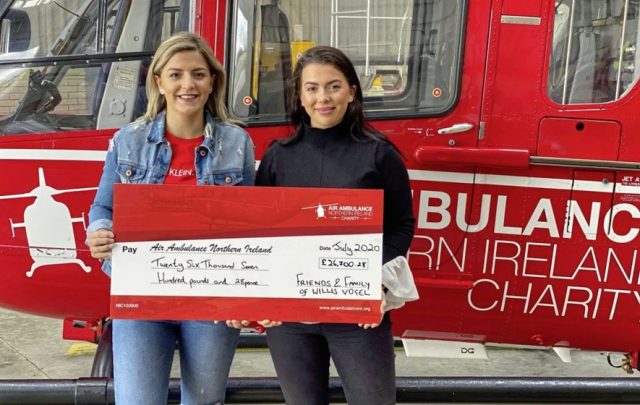 Willis Vogel’s sisters, Christa (left) and Rebecca, present the Northern Ireland Air Ambulance team with a cheque for £26,700 raised in memory of the 21-year-old

THE family of a 21-year-old man who died in a road collision have donated more than £26,000 to the Northern Ireland Air Ambulance.

Willis Vogel, from Limavady, Co Derry, died on May 31 after he was struck by a black BMW jeep.

Mr Vogel, a former student at Limavady High School who had recently started a job as a trainee engineer with Openreach, had been out for a ride with friends to Sligo and was returning home when the tragedy happened.

On Sunday May 31, just before 11am, on the Meenacloy Road between Castlederg and Ederney in Co Tyrone, Willis Vogel (21) was riding an orange Kawaski motorcycle when it was involved in a collision with a black BMW X5.

The driver of the BMW failed to stop and fled the scene with the vehicle later found in County Donegal.

Despite the best efforts of emergency services, including charity organisation Air Ambulance NI, Willis died at the scene and was laid to rest in Enagh Cemetery in Limavady.

Friends and family rallied together to raise funds in his memory and this week, the Vogel family presented the Northern Ireland Air Ambulance team with a cheque for £26,700.

His sister Rebecca said they had been “overwhelmed” by the generosity of people.

“Willis’s friend, Alan-Lee, who was one of the boys with him at the time of the collision, started a JustGiving page,” she said.

“Within 24 hours, we were way over the target. I think it had been set at £1,500 and there were also donations in cheques and cash and through the funeral director’s and directly to us as a family.

“We are very overwhelmed and it really reflects how well thought of Willis was and how much everyone valued him. We are really proud to be able to donate that amount in his memory.”

“It takes £2.2 million they need to raise a year in donations to keep maintaining their service,” she said.

“They told us it works out £5,500 a day. What we have raised is amazing and they were grateful and thankful.”

She added that her family feel the loss of Willis “every day”.

“Every day we are just as heartbroken as the first day it happened but we are a strong family and we have great family and friends around us, supporting us and we are taking every day as it comes and living every day remembering him.”

His family have urged the driver responsible to “do the right thing” to help them find peace in the wake of the tragedy.

The family of Mr Vogel previously made an emotional appeal for the driver to come forward.

Sister Christa said: “He has left a massive impact on everyone’s life and we will miss him and remember him forever. 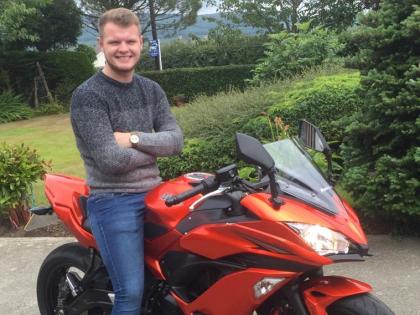 Motorcyclist Willis Vogel killed in May

“It is just adding to the pain and heartache that the person has not come forward. We urge them to please do the right thing. We know Willis would if it was the other way around.

“Willis would have been buzzing to be able to give that amount of money to such an important service” said the victim’s oldest sister, Rebecca.

The family, based in Limavady, are appealing to anyone who may have information, and ultimately the driver themselves, to come forward as soon as possible.

The BMW jeep fled the scene and was recovered by gardai in Co Donegal and handed over to PSNI detectives for forensic examination.

A 32-year-old man was arrested on Monday, June 8, on suspicion of causing death by dangerous driving.

He was later released on bail pending further enquiries.

Meanwhile, a 33-year-old man, arrested on May 31st, on suspicion of a number of offences including causing death by dangerous driving, was released unconditionally.

Detective Inspector Michael Winters said: “I’d like to thank everyone who has responded to my appeal for information following this tragedy.

“However, I would continue to ask anyone who may have witnessed this collision, or who may have captured dash cam footage, to contact detectives in Omagh on 101 quoting reference number 958 31/05/20.”