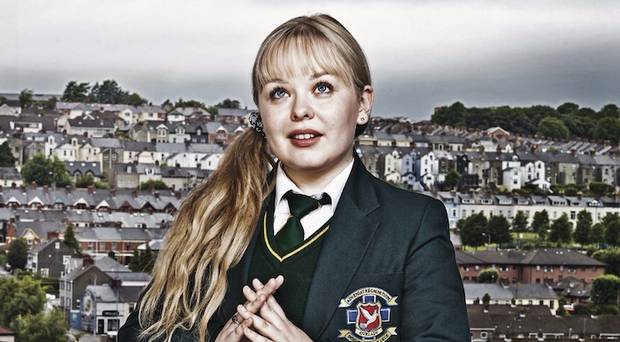 DERRY Girls stars Siobhán McSweeney and Nicola Coughlan are among the actors who have teamed up to make a new short film for Tourism Ireland which showcases some of Ireland’s favourite beauty spots.

The new clip sees the tourism bodywork with the Abbey Theatre to create Dear Ireland, which sees the voices of 50 writers and performers take part in a collection of ‘theatrical postcards.’

She also speaks about her love for the Cork beauty spot of the Beara Peninsula, and the new clips also feature top tourist attractions such as Blarney Castle, the Ha’Penny Bridge, St Anne’s Church in Cork city and the Cliffs of Moher.

“I think when people visit Ireland, they’re surprised at how different it can be to the Ireland of their imagination,” McSweeney said.

“You may have one idea of Ireland but Ireland is so diverse and has so many different kinds of landscapes from rural to urban, mountains, beautiful lush green fields, forests and cliffs.

“People come with one idea and they realise that we have the whole world on the island of Ireland.

The Peninsula Beara in West Cork is the most beautiful place on earth.

“The copper mines down there, the beaches, the surfing, the landscape, the food; my God, the food. It is a very special, magical place. Ireland inspires me because there’s no place in the world like it.”

Series Three of Derry Girls was due to start recordin in Derry city in March this year but had to be postponed because of the Coronavirus pandemic.

Hat Trick Productions who make the hit comedy for Channel 4 hope to be back in production later this year.

It means series three is unlikely to be on television screens until spring 2021 at the earliest.