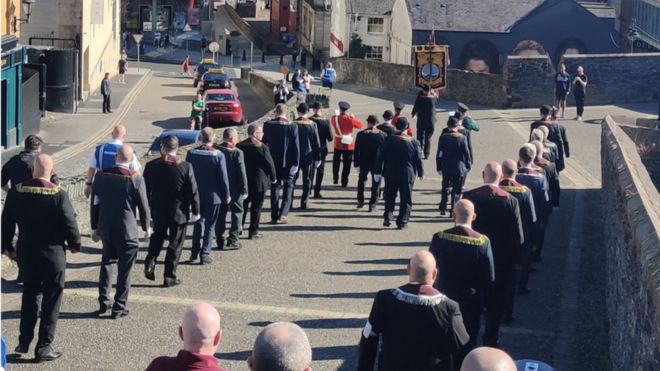 Coronavirus: Apprentice Boys parade in Derry on smaller scale due to COVID-19

THE annual Apprentice Boys parade has taken place in Derry, but on a much reduced scale due to the Coronavirus pandemic.

Traditionally, thousands would attended one of the North of Ireland’s biggest parades, marking the anniversary of the ending of the Siege of Derry in August 1689.

This year, only 30 representatives walked the walls, applauded by small groups of people watching.

The Governor of the Apprentice Boys, Graeme Stenhouse, said the event this year was “humbling”, but dignified.

“I thought it was a very humbling experience,” he said.

“I would say today we created history – there’s never been anything like that before.

“We’re living in unprecedented times and we look forward to 12 months’ time when hopefully there aren’t any guidelines in place.”

The Governor led the parade from the walls to the Diamond, where a wreath-laying ceremony took place at the war memorial with solos from a bugler and a piper.

Marchers then processed to St Columb’s Cathedral, where the Dean performed an outdoor service at the Siege Heroes’ Mound.

There was a small police presence at the small parade which passed off peacefully.

More than 80 parades are set to take place across the North of Ireland on Saturday and Mr Stenhouse urged branch club organisers to also follow official guidance, limiting numbers to a maximum of 30 participants.

Coronavirus: Apprentice Boys parade in Derry on smaller scale due to COVID-19 was last modified: August 8th, 2020 by John

Man is jailed at Derry court for...

Coronavirus: Restrictions extended to all households across...