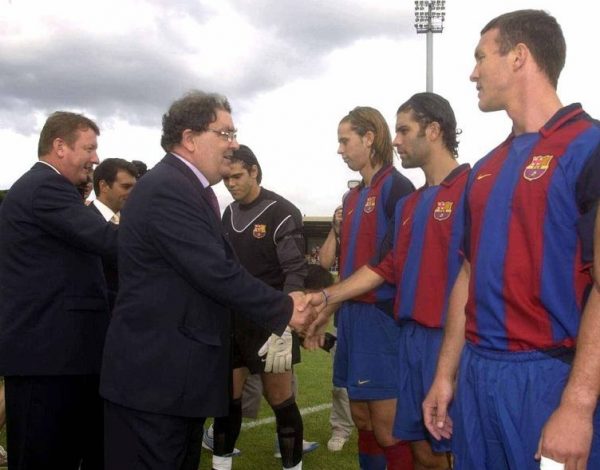 The time John Hume brought Ronaldinho and Barcelona to Derry

A stand-out moment in the history of Derry City FC came in August 2003, when a full strength Barcelona side took on the Candystripes in their home ground of the Brandywell.

Speaking to BBC Radio Ulsters Evening Extra, Jim Roddy, city centre manager for Derry and friend of the late John Hume, explained how the visit by the Catalan team, which included future Ballon d’Or winner Ronaldinho, was facilitated by the late SDLP leader.

“Derry City, as can be the case with many soccer clubs throughout the island of Ireland, fell on difficult times financially.

“John said, ‘here, why don’t we get someone like Barcelona to come and play us’,” said Mr Roddy.

“For those of us in the sport, it is a mammoth task.

Mr Roddy said John told him and the manager of the team at the time, Kevin Mahon, that they were going to take a trip to Barcelona to try and make the visit happen.

He said on arrival in the city, they met with then Barcelona president Joan Gaspart, and after John Hume spoke to him for a few minutes in French, an agreement was reached for the team to visit the city.

Mr Roddy said they then went to the Nou Camp stadium to watch Barcelona, and sat in the president’s box.

“Pasqual Maragall, the mayor at the time was saying to John, ‘the crowd is cheering for you’.

“If you can imagine this stadium of 90,000 plus people, and John was standing at the very front of the president’s box.

“And John stands up and takes a wave while the crowd there are applauding him.

“John was such an ordinary man and he was blown away by this.

“He reached people in ways that many other people will never be able to do.”

Barcelona ran out 5-0 winners but the real winner was John Hume in making the match happen in the first place.

After the match, the then Derry striker Liam Coyle said the Candystripes could hold their heads high.

“We did well up to a certain point but then they upped it a gear,” said Coyle.

“They are a world-class team and the people who paid money got to see some entertaining football.”