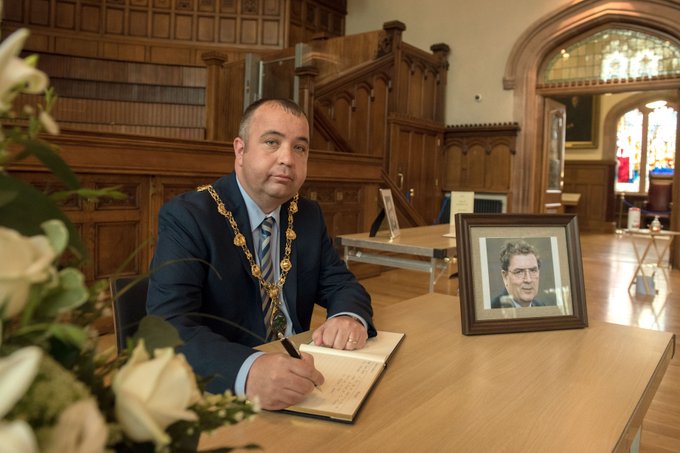 A formal Book of Condolence has been opened by the Mayor of Derry and Strabane in memory of the Nobel Laureate and former leader of the SDLP John Hume, who passed away today.

Councillor Brian Tierney encouraged people to record their tributes to one of the city’s greatest ambassadors, either by signing the Book which is located in the Guildhall’s Main Hall, or online at the Council’s website.

There was widespread sadness as news broke across the city today, and speaking on behalf of the people of Derry and Strabane, Mayor Tierney took the opportunity to pay tribute to John Hume’s commitment to peace and his leading role in making Ireland a better place.

“Today is a very sad day for Derry, but also an opportunity to reflect on the life of a truly great man, a true hero” he said.

“John Hume dedicated his life to the fight against injustice and prejudice, and was steadfast in his quest to deliver peace for all.

“He was a proud ambassador of this city and told our story far and wide as he lobbied and campaigned on behalf of the people of Derry and right across the country.

“We should all look back on what John achieved – his commitment, his humanity and his determination.

“He was a remarkable man who was never afraid to stand in the face of adversity to defend what is right.

“Today we stand in solidarity in memory of John Hume, and celebrate his selfless work to deliver change on our behalf.

“We think of his wife Pat and his family, his former party colleagues and send our deepest sympathies.

“While it’s a sad day for everyone, we must still look forward and pledge to continue his work by embracing his philosophy of peace and reconciliation.

“I would encourage everyone to take the opportunity to share their tributes to John Hume either by signing the Book of Condolence at the Guildhall or online.”

The Book of Condolence will be open from today in the Main Hall of the Guildhall, available daily from 11am – 3.30pm.

Visitors signing the Book of Condolence are advised that strict social distancing measures will be in place and are asked to adhere to the guidance of Guildhall staff.

Tributes can also be recorded online at http://www.derrystrabane.com/Book-of-Condolences-for-John-Hume