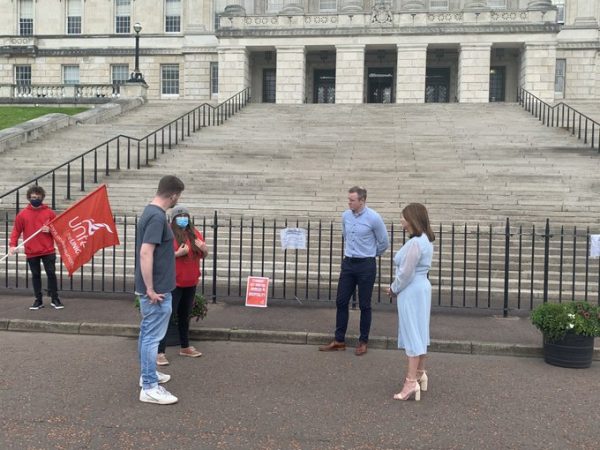 SDLP Economy Spokesperson Sinead McLaughlin has urged employers to show loyalty to those workers in the hospitality sector who have been loyal to them.

She was speaking after meeting with trade unionists protested outside Stormont against the threat of large scale redundancies.

Said the Foyle MLA: “Trade unions are asking MLAs for our solidarity and support to defend workers in the private sector.

“We have heard from academic economists that there is a real risk – perhaps a probability – that 40,000 workers in Northern Ireland that have been on furlough will lose their jobs.

“Yet trade unions fear it will be even worse than this.

“Protesters are warning that there could be as many as 60,000 redundancies in the hospitality sector alone.

“Ministers and MLAs have provided financial support to many, many businesses.

“Not all of them to be sure and we would all like even more businesses to be supported.

“We want ministers to constantly review the support packages to do as much as possible for as many as possible.

“It was local firms and their staff that risked going to work to keep open the grocery stores, deliver food to the homes of our vulnerable citizens and ensure all of us had what we needed while most people sheltered in their homes.

“Now it is those staff that need protecting. Most local firms are run by people in our communities who put ethics at the top of their concerns.

“Yet that is not true of all businesses, perhaps not by some of those companies run by managers a long way away who are less concerned about the sustainability of our communities.

“We now hear stories of staff being made redundant – including some older workers being sacked to make way for younger cheaper workers.

“These are rumours, they are allegations.

“Let us hope they are not true. In fact, let us today say loud and clear that we call on all employers to show the same loyalty to their staff that their staff have shown to the wider community to get us through the pandemic.

“I also want to make a plea to Northern Ireland’s population as a whole, be loyal to local businesses. They need our trade. They need to survive.

“If we are not there for them in the coming weeks and months, they will not be there for us in the years that follow.”