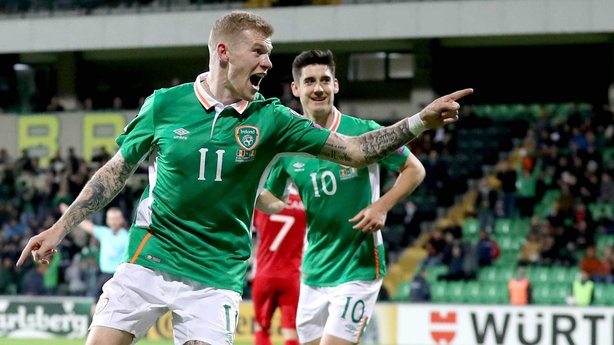 JAMES McClean says he hasn’t been contacted by any of his Republic of Ireland team-mates since criticising them for their silence over the sectarian abuse that he receives.

On Monday, James spoke of his frustration over the response by the football authorities to his plight.

He also alleged a double standard in terms of the game’s response to racist abuse of black players.

In his lengthy Facebook post on Monday and in a subsequent radio interview, the 31-year-old said that he had received “more abuse than any other player” during his nine years in the English game.

The Creggan dad has been the victim of online abuse throughout his career and also received sectarian taunts from opposition fans over his refusal to wear a poppy during the annual remembrance period every November.

“I understand the whole poppy situation. I know some people down south probably don’t have a full understanding of what happened up in the north and that’s fine.

“I’m not asking players not to wear a poppy because the backlash, that’s huge. I’ve never asked anyone to do that.

“I fully understand that they don’t want the backlash and they want an easy life.

“(But) I know if it was one of my team-mates and it was roles reversed, I would 100% back them so in that sense, that hurts a little bit.”

While McClean’s Republic team-mates have not been in touch with him since his comments, the Stoke City player says he has received a largely “positive” response.

“It makes me wonder why I didn’t kick up a bigger fuss previously.

“This has been going on nine years and the last few days have been positive.

“I’m not naïve enough to think that it’s just going to stop but it seems to be a start.

“On Tuesday night there was a steward at the Bristol City game. I’d never met this guy before and he was very complimentary.

“He came over and said that he’d listened to the interview and he said that he didn’t know what was going on.”

Back in January, McClean praised the football authorities and Staffordshire police for their responses at that time to sectarian abuse that he had received over the previous months.

Two months later, McClean was fined two weeks wages by Stoke and agreed to delete his Instagram account after he had posted a picture of himself wearing a balaclava in front of two children, with the caption “Today’s school lesson – History” along with a laughing emoji.

McClean says he now accepts the balaclava episode “wasn’t the right thing to do”, even though he says it came after “eight years of horrendous abuse”.

“I didn’t take into consideration the offence it was going to cause to people. I do regret the balaclava thing of course.

“It was just a photo. It was supposed to be funny. I was thinking people perceive me this way anyway so I may as well.”

However, McClean insisted that he had no regrets over labelling a small section of Stoke City fans as “cavemen” in 2018 after he received abuse over his poppy stance.

“The only regret about that was that I kind of labelled everyone which is not the case. The majority of the Stoke fans have been absolutely brilliant with me.”

The Republic of Ireland player says that the “constant” abuse directed at him, which has included having bullets sent to him in the post, has made his consider whether he should bring his retirement date closer.

“There are days like that and you are kind of putting a date on your retirement which is not what you want to do.

“You want to retire when you feel your body is just not up to that level any more.

“Also my kids are starting to get a bit older.

“They go to games and they are starting to ask questions,” he added.