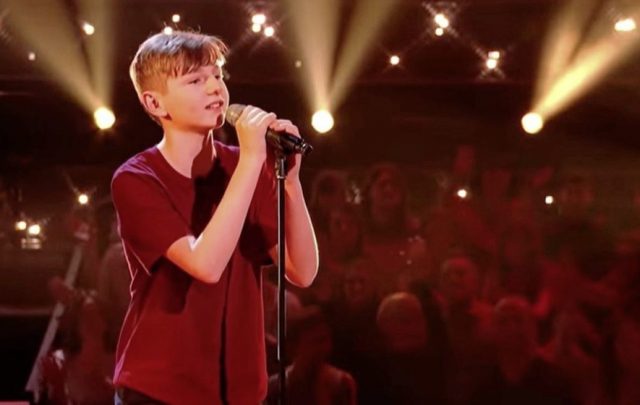 A 12-year-old boy from Co Derry stunned with his performance on The Voice Kids this weekend.

The Voice Kids launched its brand new on Saturday evening.

One of the acts winning a spot in the next round was 12-year-old Dara McNicholl from Moneyneany near Draperstown who performed I Have Nothing by Whitney Houston.

With dad and Ulster Rugby lead physio Chris, mum Donna and other family members cheering him on from behind the scenes, Dara stunned the panel members with his rendition of I Have Nothing, the classic Whitney Houston power ballad.

Just five seconds into the audition, McFly star Danny Jones pushed his button and turned his chair around for Dara, with fellow coach will.i.am following his lead a second later.

When Dara’s sweet and soaring voice tackled the high and powerful “don’t walk away from me” line of the song, Paloma Faith and Pixie Lott followed suit, making it a clean sweep for the Northern Ireland schoolboy.

Afterwards, Danny said he was “lost for words because I feel like I’m in the presence of something special”.

Quoting the Whitney hit to express his admiration for Dara’s powerful singing, the McFly man added: “For me to have the honour of coaching you would be amazing… I would have nothing if I don’t have you.”

Pixie Lott described Dara as her “favourite” and pledged that he would “have the right home on Team Pixie”.

But it was new coach Paloma who Dara picked to be his mentor on the show.

The singer told him: “You didn’t miss a note. It was crystal-clear. I did not expect to see a small person!

“I was blown away by your voice. I got goosebumps. I know lots of the songs that would be great for you to sing.”

Proud mum Donna said she and her husband had no idea about their son’s incredible voice until one of his teachers told them about his talent.

Dara then appeared in the lead role of a school production of the hit musical Oliver.

“We went to the show and we were blown away,” Donna said.

“Lots of faces around me turned to each other.

Dara, who attends St Colm’s High School in Draperstown, progresses through the blind auditions round as the first of Paloma Faith’s team of nine young singers.

The winner of The Voice Kids will receive a £30,000 bursary towards their musical education and a VIP family trip to Universal Studios in Orlando, Florida.

Fellow Co Londonderry singers Brooke Scullion, from Bellaghy, and Jonny Brooks, from Newbridge, are semi-finalists in the adults edition of The Voice. That show has been postponed to a later date because of the coronavirus pandemic.

The Voice Kids continues on Saturday on ITV at 7.25 pm.