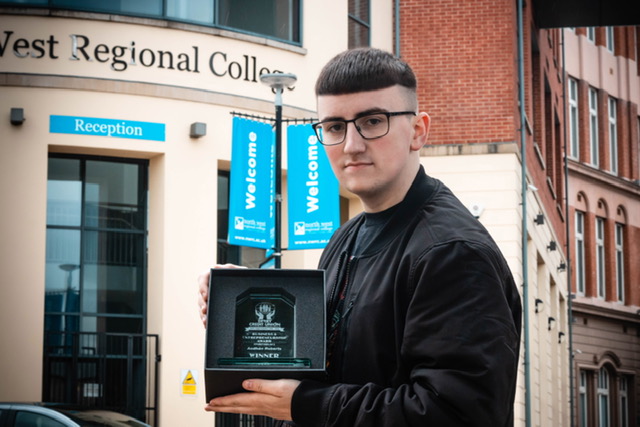 NWRC student Aodhan Roberts who was the winner of Business and Entrepreneurship Category in the 2020 Derry Credit Union Young People’s Awards, which aim to reward teenagers who make the lives of those around them better.

A NORTH West Regional College (NWRC) student who has come through one of the most difficult years of his life, losing his mother to cancer, has won a major Young Person’s Award.

Aodhán Roberts, who studies Creative Media Production at NWRC, was the winner of Business and Entrepreneurship Category in the 2020 Derry Credit Union Young People’s Awards, which aim to reward teenagers who make the lives of those around them better.

The 17 year-old, who will be returning to college in September for the second year of his Level 3 course, works as a Photographer, Videographer, Editor and practises Journalism while running his successful social media channels @derryfootage

Aodhán triumphed in the Moving Image Factual Category, for his documentary ‘Impairment,’ made with fellow student James Dalzell and Joni Dixon-Murphy, investigating the impact of drink-driving.

The Media student was devastated in 2019 following the death of his grandmother, and his mother’s terminal diagnosis with cancer.

Throughout his mother’s illness, Aodhán continued to attend classes at NWRC during the day, and spend his nights with her at the Foyle Hospice. Aodhán continued this routine for weeks, as his mother bravely fought her illness. Sadly on the 25th of October 2019, his mother passed away, taking her final breaths as Aodhán arrived to visit her.

Aodhán says the support he received at NWRC has helped him cope with many difficult situations as well as step closer to his dream job of working full time in the media industry.

He is also using his experience coping with dyslexia, anxiety and depression to encourage other students coping with struggles in their education, and recently was invited to be the guest speaker at EOTAS’s (Education Other Than at School), end of year showcase, to share his experiences of being part of the programme.

After enrolling in the Creative Media Production (Film and TV) course at NWRC in September 2019, Aodhan started up his own Twitter and Facebook page.

He covers a range of activities, including personal/news stories, events, and festivals. He’s been involved in making numerous short films and music videos which have gone on to be nominated in film festivals.

Aodhán says the main purpose of what he does is really to bring about a change in the community, support other people, change attitudes, create/strengthen community ties whenever possible and raise awareness.

The local teen aspires to use media as a platform to inspire other people in the future.

Aodhán said: “Attending the North West Regional College has been truly one of the best decisions I’ve ever made.

“Not only does it provide you with a modern learning environment that enables you to strive for the best possible progression in the future, it’s very diverse, and that in my opinion is where the strength of the college comes from.

“We have people from a range of demographic characteristics, but still, there is no judgement from anybody at the college – everybody is treated so respectfully, appropriately and equally.

“There’s so much to do, from joining a number of different clubs and societies, to representing your class and the college during events.

“My main goal in the future is to educate and inspire others through my own experience, shine a light on topics that nobody else will, while reflecting on the unique sense of community from around the world.

“You really never realise whether you’re going to have an effect, or how important your example will be to someone else – so making the difference is important. You just have to give back and pick up.”

Suzanne Rodgers, Curriculum Manager for Media at NWRC said: “Aodhán is an inspiration who showcases clear entrepreneurship. His work speaks for itself. Well done Aodhán.

“Here’s to the future and we look forward to seeing you back in college next year.”

For more information on all courses at NWRC go to www.nwrc.ac.uk/apply