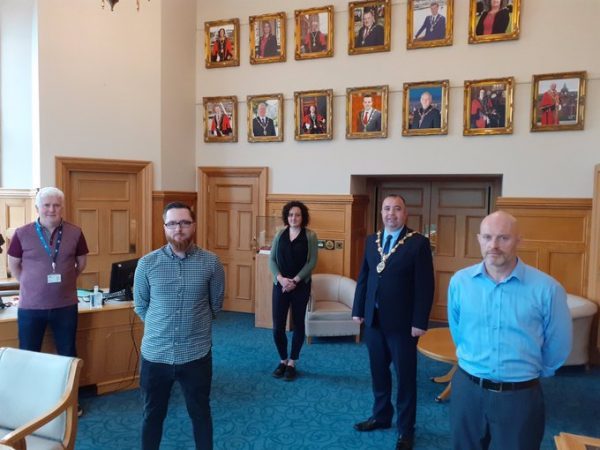 THE Mayor of Derry City and Strabane District Council, Councillor Brian Tierney, met with members of the local skateboarding community this week to hear more about their ambitions for a new skate park for the city.

The Derry Skate Park Committee, led by local skater Ronan McElroy, outlined their proposals for the facility and gave the Mayor details of the campaign which has been gathering renewed momentum in recent weeks.

Cllr Tierney told the delegation that he would be happy to work to help them advance their plans and revealed that there were also proposals for a number of fundraising initiatives also in the pipeline.

“The campaign for a skate park for the City has been active for a number of years.

“There is a large stake boarding fraternity here in the city who are passionate about the promotion of the activity and the provision of safe, modern facilities.

“I was very interested to hear how the plans have progressed and the ideas the group has about the future of skateboarding in the North West.

“The facility would have the potential to bring enthusiasts from right across the region to the city and I would support them in their ambitions to create a safe space for skate boarders to develop their skills.

“A number of other council areas have similar facilities which have proven very popular and it offers a great incentive to get young people active and involved.

“I was also delighted that the group are committed to working with me on a number of fundraising initiatives in support of my chosen charity, the Aurora Counselling Initiative, and look forward to seeing those ideas come to fruition.”

The Derry Skate Park Committee submitted an 11-page proposal to Derry City and Strabane District Council last week. The group have been lobbying local politicians and hope to bring their plans formally before Council in the coming weeks.