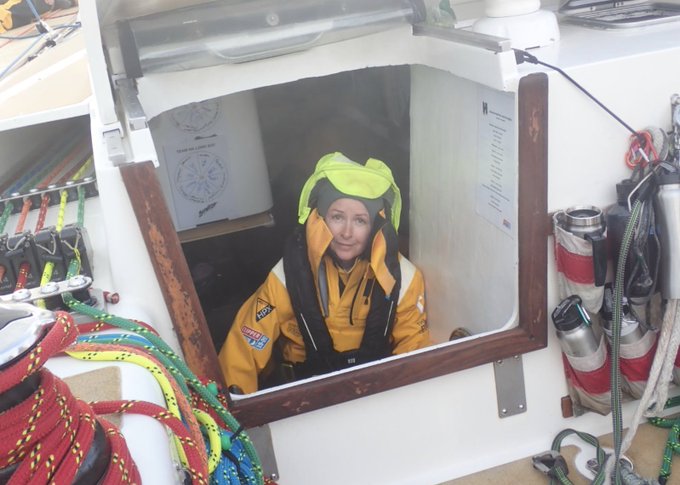 TERRI FISHER lives in Derry and is affectionately known to her teammates as ‘Terri From Derry’.

Her road to joining the Clipper Race was a short one.

She had one of the best seats in the house for enjoying the Clipper 2017-18 Race stopover and Foyle Maritime Festival which was being hosted in her city. T

Terri’s apartment overlooks the Foyle Marina and she woke up each morning looking down at the fleet that arrived following its North Atlantic crossing.

On finding her local pub full of Clipper Race Crew and staff, she went over and introduced herself.

She spent the evening finding out more about the race and after enjoying a few drinks, announced she was signing up!

Terri had recently seen her marriage end and like many other crew before her, was at a stage of her life where she wanted to see positive change.

The very next day she met up with Della Parsons, Clipper Race Recruitment Director, in the Fanzone (the hub of Clipper Race stopovers), toured one of the yachts, arranged an interview then signed her contract. The Clipper Race bug can strike quickly.

Della Parsons recalls being politely ambushed by Terri in a pub in Derry.

She says: “We’d gone for a quick drink after work and she sidled over to us having spotted the Clipper Race logo on our jackets.

“It turned out her flat overlooked the river, where our yachts were moored. She’d seen them all arrive and was in awe of the fact that the sailors had just raced across the Atlantic Ocean from New York to Derry-Londonderry.

“It was only through the course of our conversation in the pub that she realised she too could potentially take part in the race.

“After asking a zillion, wide-eyed questions, she went away armed with a Clipper Race brochure. She then came to a presentation and I interviewed her straight afterwards.”

Della added: “I am used to how the notion of racing across an ocean can grip people’s imagination and put fire in their belly but not everyone then follows through to achieve that dream.

“There was no question in my mind that Terri from Derry – as she instantly became known – was going to take part in the race. Her energy, enthusiasm and drive meant that failure was not an option. She might not have sailed before but her course to a great adventure was already firmly set.” 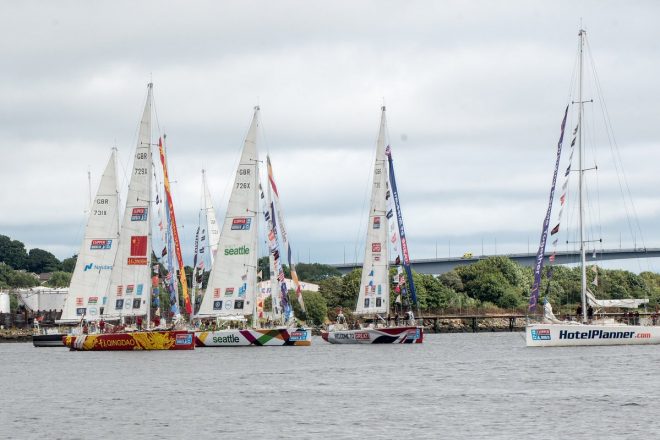 Clipper Race for Derry this summer cancelled over COVID-19

Terri is one of the 40% of crew who have never sailed prior to their four intensive and rigorous weeks of Clipper Race training.

“I was nervous but came prepared with a healthy respect for the ocean which I think is really important. I wanted a big challenge but was a bit worried about lay ahead for me.

“I originally signed up for Leg 3 as it’s my lucky number,” Terri confesses.

“Then I read up more in the brochure and started to cry. The Southern Ocean Leg is one of the circumnavigation’s most epic races and seemed so big to me but I stuck with it as I’m not one to give in. I even added on Leg 8 as I couldn’t miss sailing into my home city, on the final stage.

“Doing my Level 4 training week with my Ha Long Bay, Viet Nam Skipper, Josh Stickland. Straight away I knew we were going to get on. He has a very fair approach to leading the team and is by no way a dictator in his management style.

“At our team building weekend we all agreed the following strategy for our race: To be safe first, have fun second and competitive third.”

Fast forward to November 2019 and Terri waved goodbye to the V&A Waterfront in Cape Town, where the fleet had been berthed ahead of Leg 3.

A few days in and she was seasick for the very first time after the yacht experienced ‘rollers’ close to the Agulhas Bank, where the meeting of the Indian and Atlantic Oceans causes very distrubed seas.

“I was on mother duty and facing ‘rollers’ was not the best experience,” explains Terri.

“We’d had five days of really warm weather and then Josh told us there was a hurricane coming. We had eleven days where you couldn’t tell the difference between night and day. Everything we had to wear was soaked and we were going to bed in wet clothes.

“After five days straight of this I was starting to find it difficult. Just putting on your socks was a challenge – due to life on a constant angle and I should have been prepared for this as I’m a gymnastics instructor!

“It was the most challenging thing I’d ever done in my life. I’d bought an A-Z of affirmations on board with me. I’d go through the alphabet then start again, telling myself I was confident, determined, great.

“The night watches are tough.

“Inside my own head, I’d often be screaming. I was wearing five layers to fight off the icy cold that could grip you.

“I was still coming to terms with my marriage ending but this tough experience mended my heart. This was helped by my crew members who became family.

“Teammate Donny was always noticing if I was looking a little bit low and would make sure he lifted my spirits.

“And I repaid the favour to him. He was the joker on board and I knew that if the jokes stopped he was struggling so I’d tell the worst ones in my repertoire and he’d be back to his old self.

“We recognised each other’s ‘tells’. We all did. That’s what it means to be a team. One time I was on galley duty with Jim Day and the conditions were rough. So rough we were sharing a bucket.

“Teammate Jacqueline Kavanagh took one look at the pair of us and sent us straight to our bunks and took over.” 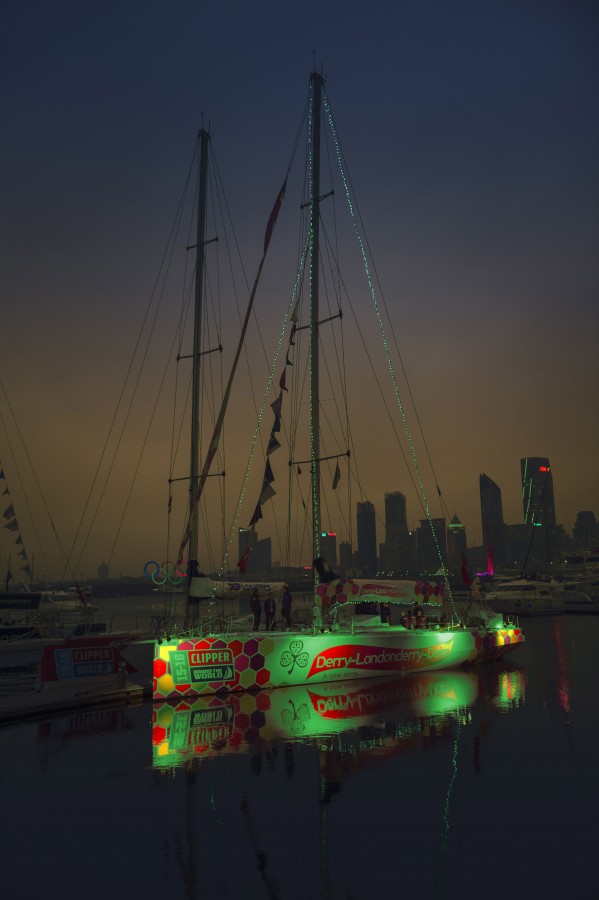 After almost a month at sea, the fleet arrived at the Fremantle Sailing Club, on the West Coast of Australia and part one of Terri’s Clipper Race adventure was over. But not before celebrating her team’s second place on the podium. “We said as a team that if we got onto the podium just once, we’d be over the moon. Well, the team has worked hard to increase that number. But always as a happy boat.”

Terri concludes, “I cried sore when I waved my team off on the next race. Since being back though, I’ve been bought lots of drinks from people in the pub, who’ve wanted to know more about my experience on the race. ‘Tell me the craic’, they say.”

Maybe through Terri’s stories, more Derry-Londonderry locals will be inspired to change their life, just like she did.

The Clipper Race in one word? Challenge

Describe yourself before the race? Nervous

What is it like to be in a hurricane? Scary / Incredible (it’s both!)