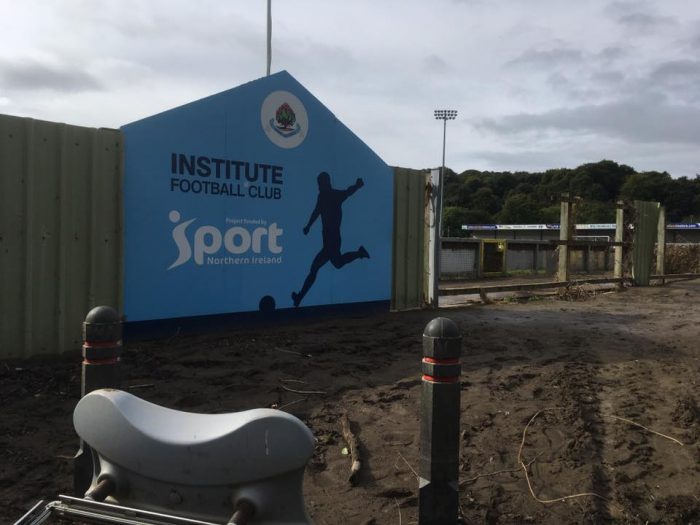 Institute FC is to launch an appeal against relegation from the Irish Premiership.

Last week, the Irish Premiership came to an end with a mathematical formula used to decide the final league placings.

That formula ended up relegating Institute who have been playing their home matches at Derry City’s Ryan McBride Brandywell stadium after its Riverside Stadium was first damaged in a flood and the by a huge fire.

But now they have lodged an appeal with the Irish FA.

In a statement released on Monday, the club say they repeatedly called for a “least harm” solution to the end of the season during the lengthy talks between clubs, that would have seen a 14-team top flight next season.

“The promotion of teams who have fought hard all season to achieve that objective and were on track to get there or be in a playoff position, was part of that ‘least harm’ proposal,” said the club statement.

“However, an equally important part of that proposal was that there should be ‘no relegation’ for teams who still had the potential to avoid it if the season had been played to its natural conclusion.”

The season was suspended in mid-March with all Premiership sides having played 31 games.

After clubs failed to reach a consensus on how to conclude the campaign, the final standings produced by the mathematical formula mirrored how the table looked when the season was halted by the pandemic.

With Linfield crowned champions, Institute were consigned to relegation with Championship winners Portadown set for a return to the top-flight.

“Institute FC are convinced that the failure of the NIFL Board to implement a ‘least harm’ solution to the curtailment of the current season is both a dereliction of their duty to protect the interests of all NIFL clubs,” said the club.

“(The decision) is a missed opportunity to provide a positive end to what has been a very difficult season for clubs and a horrendous three months for the general population and the communities that we represent.”

There will be no promotion/relegation play-off this season, meaning Warrenpoint Town’s Premiership place is safe while Ballinamallard United will spend next season in the Championship having finished second.

“While all Premiership clubs agreed on the ‘no relegation’ aspect of our proposal, a couple of clubs, understandably perhaps, were concerned about the prospect of three clubs potentially being relegated at the end of next season and the implications that that might have for their own clubs,” said Institute.

“Although, in our view, this would still have been consistent with a ‘least harm’ outcome, we were sympathetic to those concerns.

“As a result, we put forward an additional proposal for the adoption (for one or more seasons) of a 14 team league based on the Danish model.

“However, whilst this proposed model was circulated to all Premiership clubs, it was not discussed in detail because of the perceived time pressures involved in reporting to the NIFL Board, and the apparently more important issues of UEFA nominations and financial fair play in relation to the distribution of any associated financial gain.”