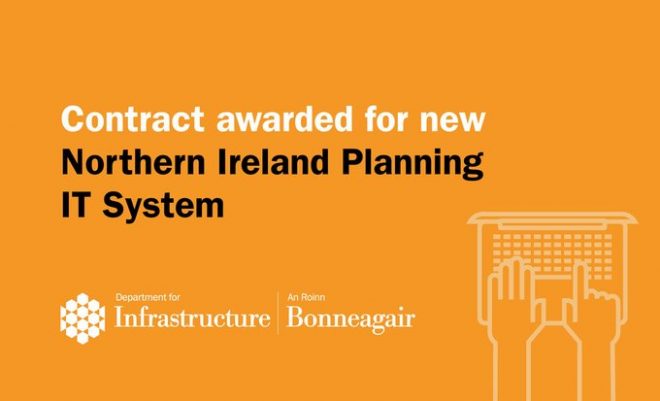 DERRY City and Strabane District Council is delighted to one of 10 local Councils and the Department for Infrastructure (DfI) to have jointly awarded a contract for a new regional planning IT system.

TerraQuest has been contracted to deliver the modern, user-friendly system on behalf of the Department and ten local councils, including Derry City and Strabane District Council, as well as providing on-going support for the new system until at least 2030.

The new system will replace the existing Northern Ireland Planning Portal (NIPP) which is reaching the end of its operational life.

A joint investment of £14m will be made in developing the new planning IT system for the North of Ireland which will benefit both customers and staff.

The new modernised planning IT system will facilitate a more responsive and efficient planning service across both local and central government, including bringing key services like the submission of applications online.

This increased use of technology and on line processing will be of significant benefit, in supporting economic recovery in the context of COVID 19.

Mayor of Derry City and Strabane District Council, Cllr Brian Tierney welcomed this important milestone saying it was a major step forward for the project.

He said he was pleased Derry City and Strabane District Council had signed up to be part of the system and was confident it would allow for improved online services and greater public and user accessibility.

Said the Mayor: “Planning impacts on everyone’s life and helps provides places to live and work, it supports regeneration and protects the best of our natural and historic environment.

“Derry City and Strabane District Council is committed to providing a modern, efficient and effective Planning Service and we believe that this new IT system will allow us to do just that and continue to deliver this critically important public service for everyone across our City and District.”

The current system supports the planning system with over 12,000 planning applications per year.

It is used by over 700 staff, over 500 consultees and thousands of citizens annually.

It is expected that the new system will be phased in from late 2021 to early 2022 and users will be informed of the changes within each council area, at the appropriate time.