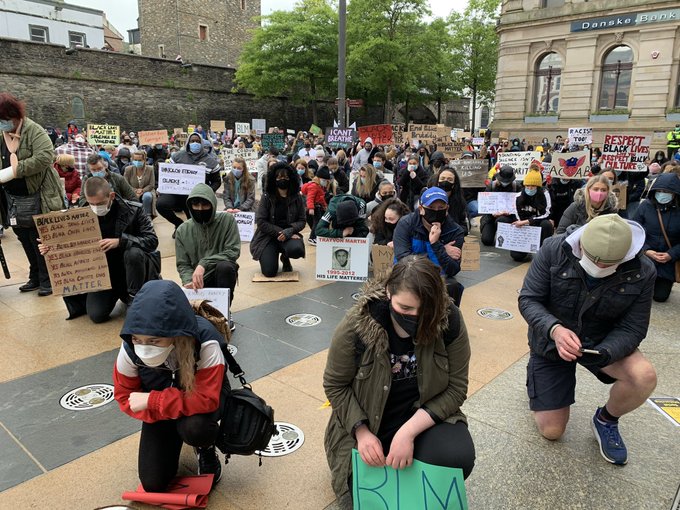 THE Police Ombudsman’s Office for the North of Ireland (PONI) says an investigation is under way into how the PSNI has “enforced the Coronavirus public health regulations at large public gatherings”.

The investigation is examining “whether police have been consistent in their approach to issuing fixed penalty notices on such occasions”.

The Police Ombudsman’s Office said it follows complaints from members of the public who attended Black Lives Matter protests in Derry’s Guildhall Square and at Custom House Square in Belfast on Saturday, June 6.

Police issued a total of 68 fines at the anti-racism demonstrations.

There were 57 fines issued in Derry, while in Belfast only 11 were handed out.

No fines were issued at a “protect our statues” protest outside Belfast City Hall on Saturday, June 13.

Police Ombudsman Marie Anderson has informed the PSNI chief constable Simon Byrne, Department of Justice and the Policing Board.

She said her investigation will focus on the police policy and how “it was and is being implemented, including how it is being communicated to police officers ‘on the ground’”.

Her office has also been in talks with Policing Board officials to “ensure the investigation does not overlap” with a review of the police response to COVID-19 announced by the board last month.

Up to 500 people had attended the rally at Guildhall Square and conformed with social distancing measures.

Early this week Lilian Seenoi-Barr, director of Programmes at the the North West Migrants Forum which was involved in organising the Black Lives Matter protest in Derry, said she wanted an apology from the PSNI.

She also urged the PSNI to “cancel all the fines” that were issued.

“There is so much hurt and mistrust in my community right now,” she said.