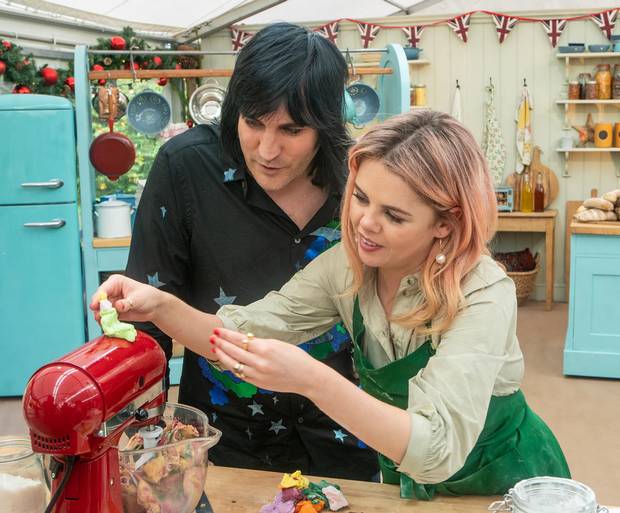 Saoirse-Monica Jackson in the Derry Girls bake off

SAOIRSE-MONICA Jackson has revealed she had a lucky escape from a man posing as Busted’s manager when she went to see the three-piece in concert in Dublin.

The Derry Girls actress, who plays Erin on the hit show, explained to band member Matt Willis how she was almost duped by the man she suspected to be ‘a child catcher’.

She said: “Me and Louisa (Harland) were actually at the same Busted concert in Dublin when we were both about nine, and I went with my two best friends at the time.

“We were actually sitting in front of a man who claimed to be your manager and this man told me and my two nine-year-old friends that we could come on the radio the next day to talk about how much we loved Busted.

“We obviously weren’t allowed because we were nine and we couldn’t stay in Dublin and we were devastated about it. I have a photo of him and I want to know if this man was your manager or a child catcher.

“And he does look like a child catcher. He was there on his own. He asked us to stay the night in Dublin and meet up with him the next day to go on the radio.

“Not to stay with him but stay with our mums and meet up with him. I can’t remember his accent, I can just remember the screaming match of ‘Why did you not let us go, it’s Busted’s manager, and let us be on the radio.'”

She told the story on the No One Is Watching podcast which is hosted by Busted’s Matt Willis. He was able to set the record straight after looking at a photo from the time of Saoirse and her friends with the mystery man.

He said: “This man is 100% nothing to do with anything I have ever done in my entire life. I’ve never seen this man in my f***ing life.”

Saoirse-Monica has become a huge star since the Channel 4 show about Erin and her school friends launched. But the 26-year-old isn’t interested in screaming fans or getting invited to fancy parties. She thinks the best thing about becoming famous is free blow-dries.

She said: “I knew it would make me famous in Derry. I didn’t know if it would be a really, really bad thing but it is class.

“Derry has really good blowdries so that is the peak.”

It’s also been revealed Saoirse and her Derry Girls pals will take part in a special Comic Relief night, to be broadcast on RTE One on June 26.

A third series of Derry Girls has been put on hold when filming for the new series in Derry had to be cancelled in March because of the Coronavirus outbreak.

It is hoped recording for the new series can get underway soon as lockdown restrictions start to ease.

Coronavirus: Police issue over 500 fines and...

Coronavirus: 727 more cases in North from...