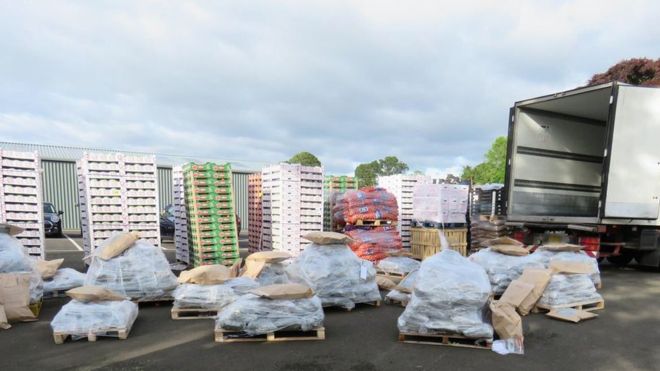 The drugs were found when a lorry was stopped in Templepatrick

A MAN from Co Derry is one three males who ave been arrested in the biggest drug seizure carried out by the National Crime Agency in the North of Ireland.

An estimated 600kgs of herbal cannabis were seized when a lorry was stopped in Templepatrick in the early hours of Wednesday.

The drugs, with an estimated value of £10m-£12m, were discovered among a “cover load” of vegetables.

NCA and PSNI officers took part in the operation.

It is understood the vehicle had travelled through Great Britain and crossed into Northern Ireland on a ferry to Larne.

Three men, including the lorry driver, were arrested on suspicion of conspiring to import controlled drugs.

The men, aged 62, 37 and 32, are from County Tyrone, County Londonderry and County Armagh. All three remain in custody.

Two premises were also searched, one in Co Derry and one in Tyrone.

“A seizure of this size will have a huge impact on the organised crime groups involved in its importation, depriving them of commodity and, most importantly, profit,” he said. 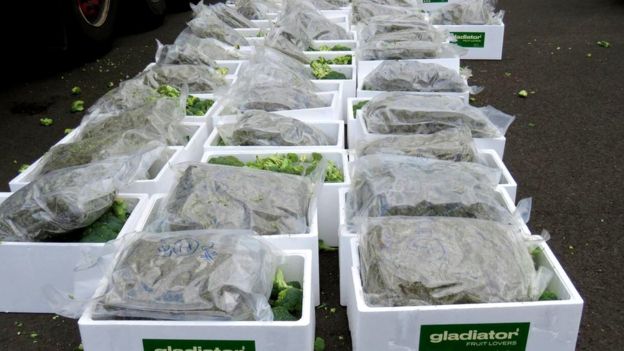 The drugs were found among a cover load of vegetables

“We are determined to do all we can with our law enforcement partners to disrupt and dismantle drug supply routes, not only here in Northern Ireland but across the UK.”

Detective Chief Inspector Brian Foster, from PSNI’s Organised Crime Unit, said: “This ongoing NCA-led investigation resulted in a joint operation between police and NCA over the last few days which has uncovered between £10-12m of herbal cannabis.

“We will continue to work closely with NCA to disrupt the nefarious activities of organised crime groups operating in Northern Ireland.”