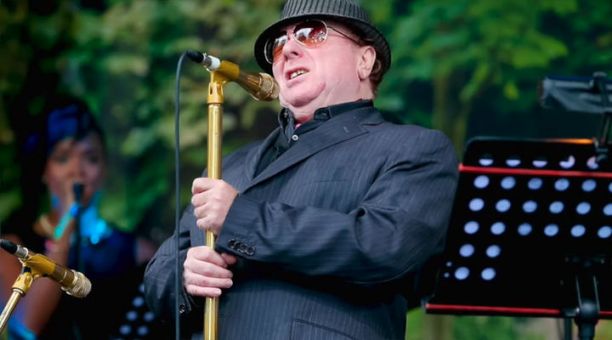 MUSIC fans left disappointed by the cancellation of this year’s performance by Van Morrison at the City of Derry Jazz Festival have been given a reprieve with news that the legendary performer will return in 2021 to celebrate the event’s 20th anniversary.

Patrons with a ticket for the original performance date of Saturday May 9th 2020 can now use it on April 30th 2021 or if your ticket was for Sunday 10th May this is now valid for Saturday, May 1, 2021.

If the dates are unsuitable a refund is available through the Millenium Forum Box Office where limited tickets for both dates will be available.

The City of Derry Jazz Festival was scheduled to take place for the 19th time this year, with a packed programme of events expected to draw upwards of 70,000 people to the city.

Restrictions to reduce the spread of the Covid 19 virus put paid to those plans however a virtual online festival broadcast on Facebook was enjoyed by tens of thousands of music fans over the May Bank Holiday weekend.

Mayor of Derry City and Strabane District, Councillor Michaela Boyle, said the announcement was a welcome boost to disappointed fans.

“This is fantastic news for the Festival,” she said.

“It was unfortunate for music fans that the original gig was cancelled but this will give ticket holders a second chance to see a living legend at the Festival.

“The return of such an acclaimed artist to headline the Jazz Festival just highlights how the event is regarded in the music world.

“Van has a dedicated army of fans and his previous gigs here have been hugely successful.”

Van Morrison last headlined the festival back in 2018, when he brought the house down with a captivating medley of jazz classics and his definitive collection of rhythm and blues hits.

In 2021 fans can expect another flawless performance of favourites from the music legend’s impressive back catalogue of hits spanning the decades.

With over 40 studio albums under his belt, the multi-award winning song writer and performer’s authenticity and energy continue to enthral audiences who travel from across the world for his shows.

“We are so pleased to welcome Van Morrison back to the festival next year for what will undoubtedly be a show-stopping performance,” she said.

“Van is synonymous with jazz and blues and has hugely influenced the genre within the music industry, so it’s only fitting that he tops the bill on our 20th year.

“Van is always a major draw for fans of all ages and a small number of reissued tickets will be sold so I would recommend booking tickets early to avoid disappointment.”

If the rescheduled dates are unsuitable for existing ticket holders please email info@millenniumforum.co.uk and the Box Office team will assist you with a refund.

Limited tickets for both dates are now available to book via www.millenniumforum.co.uk/shows/van-morrison-2/

For more details on the City of Derry Jazz and Big Band Festival including a history of the event, visit www.cityofderryjazzfestival.com

Van Morrison to return to celebrate 20 years of the City of Derry Jazz Festival was last modified: May 30th, 2020 by John