CCIS needs £215,000 to maintain its critical service to vulnerable people in Derry.

Health Minister Robin Swann in response to a letter from Mr Durkan advised his department will issue a decision on funding in early June.

Mr Durkan added that any decision not to fund this service would fly in the face of the Executive’s repeated commitments to improving mental health services across the North.

Said the Foyle MLA: “The stark reality of the future of the Crisis Intervention Centre in Derry has been apparent for quite some time.

“The crucial requirement for continued funding is one I have raised consistently with the Department.

“The need for this service is blatantly obvious, my constituency of Foyle has among the worst suicide rates across these islands, any decision not to fund will force its closure, consequences of which I fear will reverberate throughout our communities.

“I appreciate his department is under immense budgetary pressures but this provision is much too important to let slide.

“Furthermore, it is clear more decisive action and contribution is required from the Executive.

“The people of this city have had to fight for absolutely everything to improve lives here; Derry will not let up in this fight to fund our hard-won Crisis Intervention Centre.

“The £215,000 required funding is a paltry sum in terms of the Executive budget, to secure a critical service which has proved a lifeline to so many individuals in this city.

“The need for this community mental health provision is evident, it will continue to be needed, sadly even more so as we move into challenging and uncertain times.

“With mental health charities already reporting an exponential rise in demand during this crisis; that demand is likely to sky-rocket as the financial consequences of this pandemic unfolds.

“We must also consider support networks and local charities which have been left utterly decimated in the wake of this crisis, compounded by the quite frankly inadequate support for the voluntary sector so far.

“The unfortunate likelihood is that they will lose workers and many may be forced to close their doors. 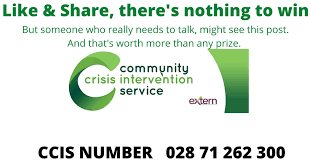 “It’s a startling reality but nonetheless one that underscores just how crucial the Community Crisis Intervention Centre will be in the weeks and months ahead.”

He added: “People are sick and tired of politicians promising the moon and delivering nothing.

“It’s high time the Executive put their money where their mouth is and actually deliver on their promises.

“Lives are at stake and inaction on such a crucially important issue as mental health, will put lives in danger.

“The Executive has a duty to act in accordance with their word, now is the time for creative thinking to find the funding for this life-saving community provision.”

Durkan: The Executive must contribute funds to Derry’ Crisis Intervention Service was last modified: May 29th, 2020 by John