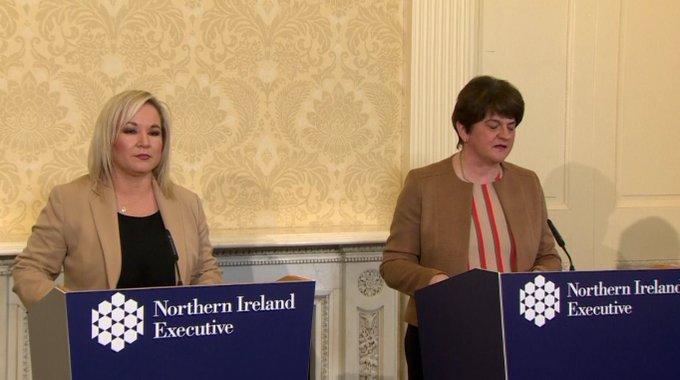 Tackling Covid-19 in care homes is still a “critical battle”, the first and deputy first ministers have said.

Almost half of the 664 Covid-linked deaths recorded by NI’s statistics agency, Nisra, occurred in care homes.

There has been 27 confirmed deaths from Coronavirus in the Derry City and Strabane District Council area since the start of the pandemic with a further 163 confirmed cases.

Speaking in a joint interview on Sky News, Arlene Foster said care homes had always been a focus for the executive.

The first minister said the Department of Health had been planning to make sure it could deal with care home outbreaks, alongside hospital transmissions of the virus.

“We have made many interventions in our private care home sector as well,” she said.

“The whole executive acknowledges care homes are a critical battle for us now and we want to deal with it in a very proactive way.”

Last week, the Department of Health said testing on all care home residents will be completed by the end of June.

“In so far as we’re having to work around the clock to take this on,” said Ms O’Neill.

“There’s been differences in emphasis but not differences in approach. We were thrust into this but executive colleagues have worked closely together to save lives”.

Both ministers said they had also felt the strain of the pandemic affecting their normal lives.

Ms O’Neill said as political leaders, they had given up much “family time”.

“We’re no different to anybody else, we find it as hard as everybody else,” said the deputy first minister.

“Our reality is the same as everybody else’s.”

Mrs Foster said she missed the “ordinary things we take for granted”, like going to church and getting her hair cut.

“I hope after this that people do value their freedom and all these things they haven’t been able to do over the past eight weeks,” she added.

The first steps to ease lockdown in the North of Ireland took effect last week.

The executive is next due to review the lockdown regulations by this Thursday, May 28, but it has not put a timetable into its five-step pathway to recovery.

COVID-19: Coronavirus in North’s care homes a ‘critical battle’ for executive was last modified: May 24th, 2020 by John