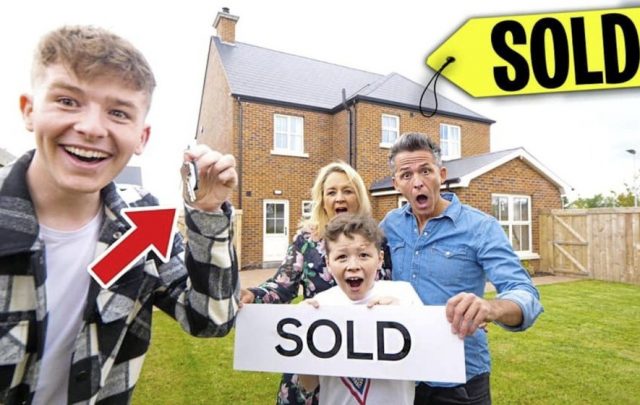 DERRY YouTube star Adam Beales has stunned his parents by buying them a new home.

The 20-year-old, who has more than 2.7 million subscribers to his YouTube channel, presented mum Edelle and dad Paul with the keys this week.

Hugely popular with pre-teens and young teenagers, his regular videos – many featuring pranks with younger brother Callum – have earned him a fortune.

The former St Columb’s College head boy came up with the idea of buying his parents a new home when they started looking at houses last year – and he settled on the show house at a new development.

However, his plans to hand over the keys were hit by the Coronavirus lockdown and he admitted he had concerns about celebrating the news while so many people are struggling.

“I don’t want people to get the wrong idea that this house was just bought on a whim by some obnoxious vlogger during times like this,” he said.

A video shows him bringing his parents blindfolded to the four-bedroom house which has been completely furnished and linked to technology with even a robot vacuum cleaner.

Adam, who recently donated more than £1,000 to people in need who contacted him on Twitter, paid tribute to his millions of followers.

He said: “I want to say a massive, massive thank you for letting me be in this position to help my family out.”

He added that, adhering to social distancing rules, the family hope to move in the near future.

“I think they (parents) might need some time for it all to sink in,” he said.