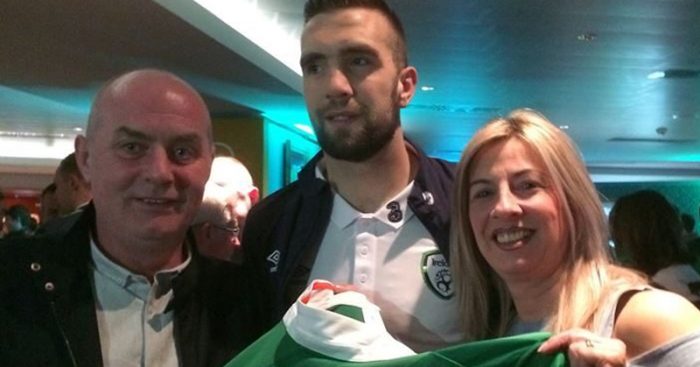 Mr Duffy is understood to have passed away at his home.

Originally from Ard O’Donnell in Letterkenny, the 53-year-old was well known in football circles and was a regular at Republic of Ireland matches home and away.

“You weren’t just my dad, you were my hero, my idol,” he said in his tribute.

“I’ll miss ringing u after the match and you telling me how sh**e I was.

“Daddy I love you and miss you.

“Look after us all now.

“Every time I put that green shirt on for our country I’ll be thinking about you because I know how proud you were of me playing for Ireland.

“Love you and miss you.”

The FAI today expressed condolences to Shane his family following their sudden loss.

A dedicated supporter of the Ireland team, who travelled all over the world to watch Shane play and always mixed in with Irish fans, Donegal native and Derry resident Brian was incredibly proud of his son’s achievements as a player.

Shane first represented Ireland at Under-19 level before becoming the country’s second most-capped Under-21’s player and then making his senior debut in 2014 and captaining the team against Denmark in November 2019. Brian was part of that journey all of the way.

Senior Ireland team boss Stephen Kenny said: “Our thoughts are with Shane and his family at this very sad time. Brian was very proud of his son, a proud football fan and a huge supporter of the Foyle Harps club in Derry where Shane played his underage football alongside Patrick McEleney and where Paddy McCourt learned the game.

“My own son Eoin played for Harps up to two years ago and I know just how central to the Galliagh community the club is. Brian’s loss will be felt by everyone at Foyle Harps and in Galliagh but none of us can comprehend what Shane and his family are going through now. We can only offer our support and sympathies.”

FAI Interim Deputy CEO Niall Quinn said: “To lose a father at any time is heartbreaking but to lose Brian at just 53 years of age is such a tragedy for Shane and his family. We can only imagine the pain they are going through now and I am sure I speak for everyone involved with Irish football when I offer our sympathies to Shane and the Duffy family in Derry and in Donegal.”

President of the FAI, Gerry McAnaney added: “On behalf of the Football Association of Ireland, I offer our condolences to Shane and his family on the loss of Brian at such a young age. Our thoughts and prayers are with Shane, his mum Siobhan, brother Tony, daughter Nicola and the extended Duffy family. May Brian Rest in Peace.”

Shane Duffy pays tribute to his ‘hero’ dad Brian who has died aged 53 was last modified: May 13th, 2020 by John