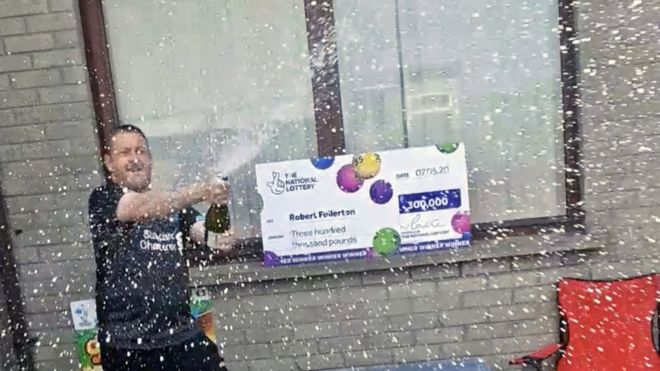 In his day job he sprays paint but today it’s champagne as Robert Fullerton celebrates his £300,000 lottery win

FROM furlough to a fortune – a Co Derry man has said he cannot believe his luck after winning £300,000 on the National Lottery.

Robert Fullerton, 30, and wife Susan, 25, from Castledawson, were feeling the lockdown lows.

They had both been furloughed from their jobs in the Coronavirus pandemic.

But an essential visit to a shop last week became a dream come true after he won the money on a scratch card.

“I started physically shaking,” said Robert who works as a kitchen paint sprayer.

The impulse decision to buy two scratch cards, from a store at Magherafelt Road in their home town on 4 May, has proved life changing, he said.

He looked at his cards at home that evening and thought he was dreaming.

“I was thinking to myself, ‘that’s not right’ and had to get up and go outside for some fresh air.

“I showed the scratch card to Susan and took a photo that I sent to my mum and sister – both of whom agreed that I wasn’t seeing things and that, as far as they could see, I’d won three hundred grand,” said Robert.

“After a restless night, with little or no sleep, I called the National Lottery the following morning. They asked for some details and then, I’ll never forget, the lady on the phone said… ‘Congratulations, you have won £300,000’!

“My reply was ‘you what?’ My heart felt like it was going to burst out of my chest.

“In fact, I still can’t believe it. It’s like a dream come true, especially in these uncertain times when we’re stuck at home and don’t really know how our jobs will be affected by this coronavirus pandemic.”

Despite his big win, he hopes to get back to work as soon as possible, saying that he loves his job and the “banter” with his workmates.

But he has big plans on what he is going to do with the money – including a new house, a first holiday abroad with Susan and some driving lessons. 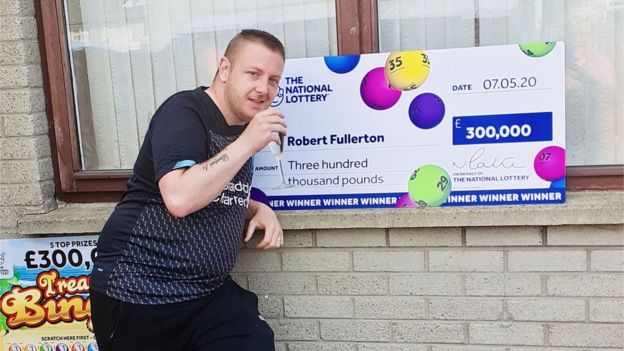 “Also, we know it might be some time away, but when people are able to travel again, we’ll go on a holiday to Benidorm.

“The only times I’ve been abroad before were on school trips, so it’ll be amazing for Susan and me to fly off somewhere sunny.”

As a Liverpool fan, Robert has other plans too.

“I’m a lifelong red, so I’ll definitely be buying myself a new strip and making the trip across to Anfield a few times,” he said.

“If Susan supported Liverpool, I’d consider our own box at the stadium – but unfortunately she’s a Chelsea fan so that’s not really going to work.”

“Never in my wildest dreams did I ever think we would win something like this,” he said.

“I suppose no-one thinks they will but at the end of the day it has to happen to someone and we’re very grateful that it’s landed on our doorstep on this occasion.

“We’ve never had a lot of money and what we have we’ve worked hard for. It just goes to show that it really can happen to anyone.”

The traditional National Lottery win celebration has had to be put on ice, given the current restrictions, but a family party is being planned.