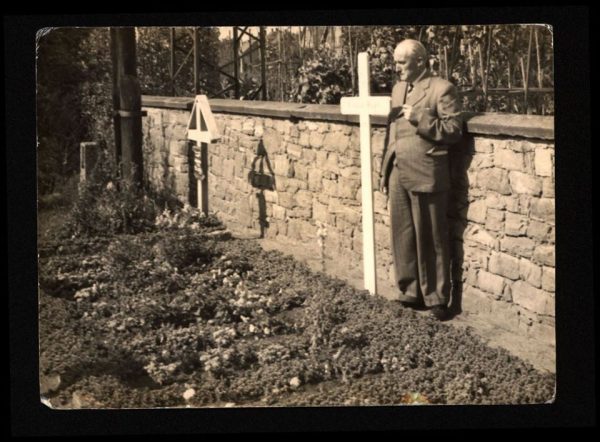 After over a year of searching, Ernest Barr finally found where his son Mackenzie was buried. He did this with the help of hundreds of Military and Red Cross Personnel after writing hundreds of letters requesting help and information

DERRY City and Strabane District Council’s Museum and Heritage Services today launch a series of new online collections and resources charting the City’s role during the Second World War, as we approach the 75th anniversary of VE Day.

The series will commemorate life in Derry at the time, as well as documenting the experiences of the thousands of military personnel who passed through the port during the Second World War.

Oral history recordings, videos, archives and images will all be made available on the Tower Museum Learning Website from today, Friday May 8.

One collection of particular poignancy is the Barr Collection, featuring a series of letters and personal effects relating to Sgt. Mackenzie Barr who served with the RAF.

Mackenzie’s plane was shot down while flying in a bombing raid over Germany and was declared as Missing in Action.

The search for Mackenzie’s whereabouts by his father Ernest, a pharmacist on William Street, are painfully presented in a series of letters and medical reports.

With letters from US Army General Dwight Eisenhower’s Office included, the tragic search for Mackenzie’s body ends at a grave site in Southern Germany.

Curator with the Museum and Heritage Service, Roisin Doherty, said the archive offered a moving insight into the realities of the conflict for ordinary people whose lives were changed forever.

“This is an incredible collection of documents, offering a first-hand witness account of the horror of losing a loved one during conflict.

“From the initial devastation, to hope of survival, to confirmation of a tragedy – it’s all revealed in great detail during the heart-breaking search for more information. 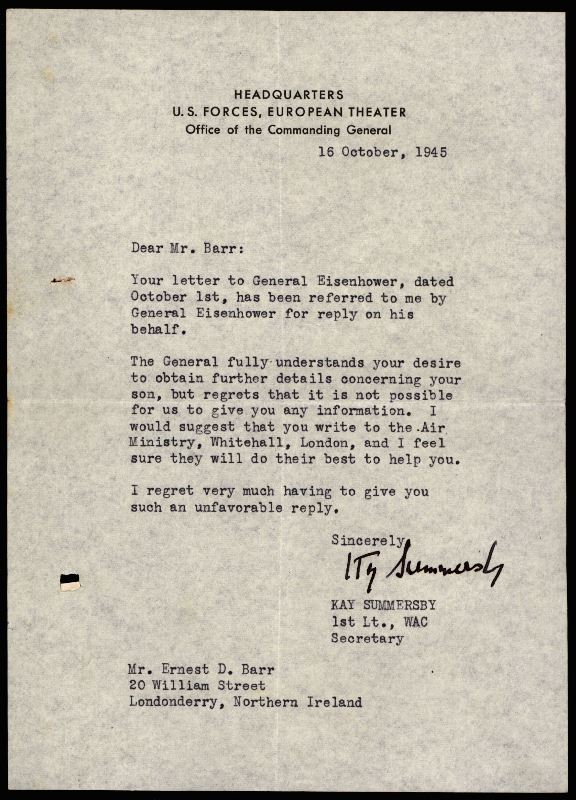 “The help offered to Mackenzie’s father by local friends and associates, as well as numerous military and Red Cross personnel, is touching to read and reflect a common theme for the countless parents who underwent a similar experience during and after this tragic worldwide conflict.

“It’s fitting to commemorate this story on the 75th Anniversary of the end of the War in Europe, and we would like to thank the Welch family once again for donating this collection to the Museum and Heritage Service.”

Mrs Millicent Welch, sister of Mackenzie, whose husband David prepared the archives for the museum service, said: “We are delighted at the publication of the ‘Barr Collection’ to coincide with the VE Day commemorations.

“A lasting tribute to both my brother Mackenzie whose young life was taken in the war, and my father Ernest who showed such determination in ensuring that his son received a fitting burial, along with the presence of mind to ensure that his journey would be recorded for generations to come.

“We are deeply indebted to the museum for all their efforts in preserving and presenting the original documents, and for telling the story that goes with them.”

The collections will be made available on towermuseumlearning.co.uk from today, Friday, May 8.