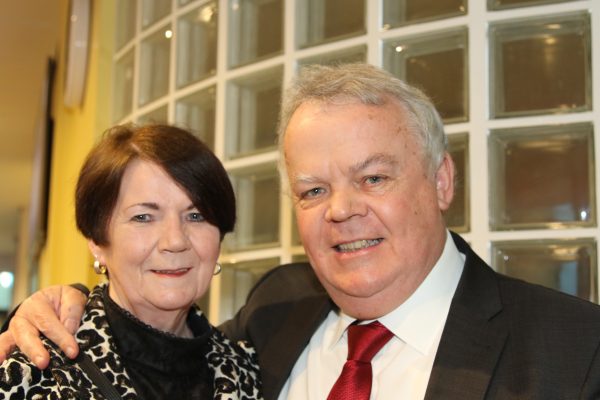 MAYOR of Derry City and Strabane District Council Cllr Michaela Boyle has expressed her deep sadness on the news of the passing of John Dallat MLA and expressed her heartfelt sympathy to his family.

Mayor Boyle said she was deeply saddened on hearing the news and would remember John fondly for his warmth and friendliness, as well as his witty personality.

She said: “I worked for four years with John when I served as Chair of the Public Accounts Committee in Stormont and he was the Deputy Chair.

“We had a very good working relationship and worked really together.

“I was very fond of John and found him to be a really genuine person, who was always friendly and caring and had a great warmth and love for people.

“He was a great yarn spinner and I enjoyed listening to his many tales and stories.

“He was a very knowledgeable and well-educated man who was committed to doing all he could to represent his constituents and bring about a better future for everyone.

“He was a voice of the people and a strong voice for justice and equality for all.

“I am very proud to call John a friend, it was a friendship that lasted throughout my tenure as MLA and into Council.

“I am deeply saddened that he lost his brave fight against cancer and want to extend my deepest sympathy and condolences to his wife Ann, his children and his grandchildren.

“We have lost a great character and a tenacious and loyal politician, who worked with all parties for a better future for everyone in the North.

“When we worked together on the Public Accounts Committee, he was totally committed to ensuring public finances were always protected, and that good practice and scrutiny were at the heart of the all the work that we did.

“John Dallat will not only be greatly missed by his family and friends, but by everyone who had the pleasure of knowing and working with him.

“Rest in peace John and sincere sympathy to the wider Dallat family at this time,” added Mayor Boyle.