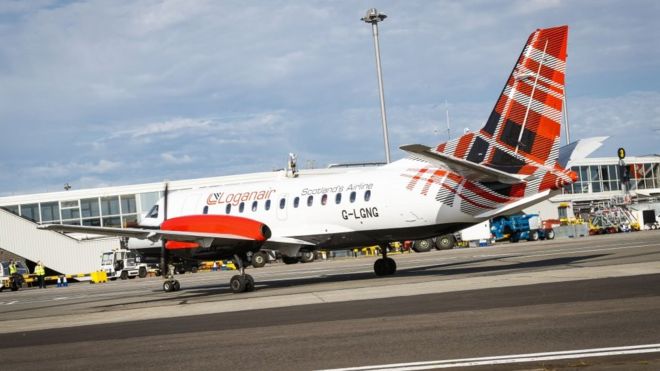 Government to give £5.7m backing to remaining flights from Derry and Belfast

THE BRITISH government has announced a £5.7 million support package to maintain the last two air passenger services operating from the North of Ireland.

The Coronavirus crisis has seen all flights suspended apart from two London services operating from City of Derry and Belfast City airports.

The money will be shared between the airports, Aer Lingus and Loganair.

“We must ensure that critical workers can continue to fly over the Irish Sea, and today’s investment in these lifeline services guarantees that,” said Transport Secretary Grant Shapps.

The package is being jointly funded by the NI Executive and the Westminster government.

The Loganair flight from Derry already receives government support and that will be increased.

The government said the Aer Lingus flight from Belfast City “would be at risk without financial assistance given low passenger numbers”.

“The UK Government has promised to do everything in its power to defeat coronavirus and to protect people, jobs and livelihoods across the United Kingdom,” said Northern Ireland Secretary Brandon Lewis.

“As part of our efforts, we have been working closely with the Northern Ireland Executive and the Department for the Economy to deliver this new air connectivity support package and we will continue to work closely with them in the weeks and months ahead as we tackle this pandemic.”