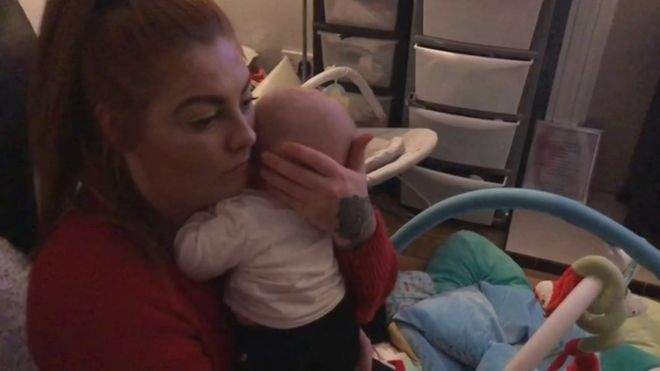 A terrified Derry mother says she is “living in fear” after an arson attack at the entrance of her Galliagh home at the weekend.

Bronagh Rogan said she was trapped inside an upstairs flat with her four-month-old baby after a bin was set on fire outside the front door to her flat.

“I couldn’t get the window open, I was that badly shook up,” she told BBC NI News.

The police said they were investigating a fire on a communal landing. The blaze was extinguished by firefighters before Ms Rogan managed to get out.

Ms Rogan, who was treated for shock, explained what happened.

“I was in here with my four-month-old and I was just running around doing the washing and I was at the radiator at the front door and I noticed flickering through the glass,” Ms Rogan said.

“I opened the door, a big waft of smoke hit me in the face and I completely freaked out.

“I ran into the living room where the baby was sleeping on the sofa and I closed the door and rang 999.”

She added: “The fireman said if the wind was blowing the other way that it would’ve caught the door straight away and I had a very lucky escape.”

Ms Rogan said she lived in constant fear of impending attacks on her home.

She said her five-year-old son, who was staying with his father at the time of the bin fire, refuses to stay at her house now. 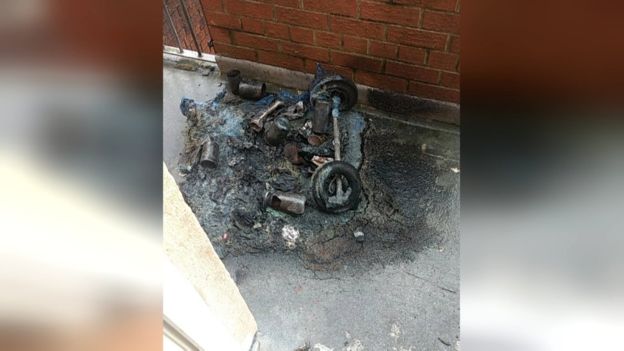 Ms Rogan believes she is the victim of such attacks because she is one of the few residents in her block of flats to speak out against anti-social behaviour.

“It’s an ongoing thing,” she said.

“I think it’s the fact it is only me that goes out and asks them to move and no-one else in this block of flats bothers about them,” she said.

SDLP councillor Brian Tierney condemned the incident and said he had been working closely with community workers and a range of agencies to ensure “this dangerous, anti-social behaviour stops now”.

“This type of activity has been going on around this particular property for quite some time,” he said.

“I have been working with the resident and will continue to do so until this recklessness stops and she is allowed to live in peace.”

Police at Strand Road said that they are investigating the arson attack.

“The NIFRS attended and extinguished a fire in a bin in a communal landing area of flats in Galliagh Park on Friday night,” said a PSNI spokesperson.

“No damage was caused to the landing or stairs.

“A woman in her 20s who had been trapped, along with her baby, inside a flat by the burning bin was treated for shock.

Mum says she is ‘living in fear’ after arson attack on her Derry home was last modified: February 25th, 2020 by John

John
Tags:
Bronagh RoganDerryFIRE AND RESCUE SERVICEgalliaghMum says she is 'living in fear' after arson attack on her Derry homePolicePSNI
ShareTweet