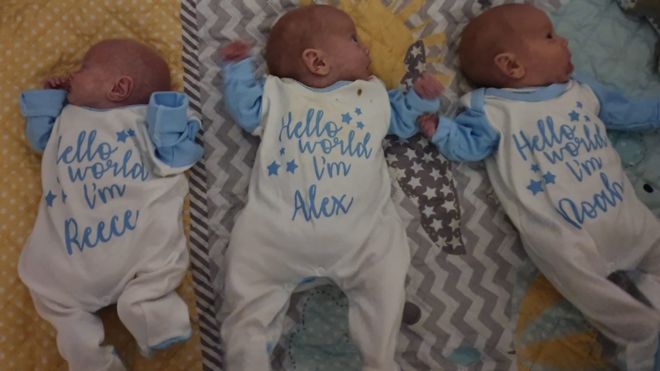 THESE are the triplet boys that the Patton family thought they might never see.

Maria, Brian and seven-year-old daughter Mia went from a family of three to six with the arrivals of the little bundles of joy Noah, Alex and Reece last November.

The couple described their new additions as “miracles”.

The family were told by several physicians the likelihood of all three children surviving the birth was low.

The couple had been trying to add to their family for years, but had suffered two miscarriages.

Speaking to BBC Foyle, Maria Patton from Strabane described the process as “one hell of a journey”.

“It was very scary. You wanted to be happy, but every appointment, every consultant said we would be lucky to get out of this pregnancy with three,” said Ms Patton.

She said doctors had even asked the couple if they had looked into cremation or burial.

Maria and partner Brian kept the news of their pregnancy secret until after their 12-week-scan fearing the worst. 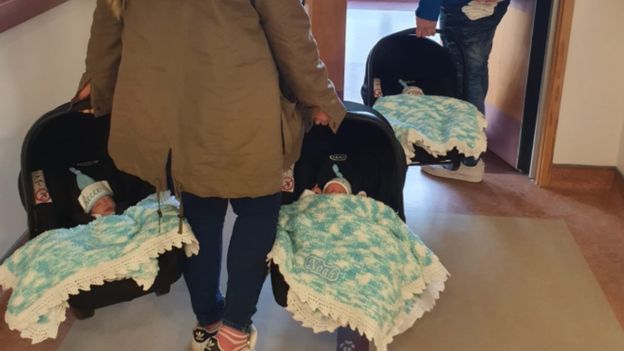 “It’s very daunting. The whole way through you’re worried that you could potentially lose one or lose two.

“We knew we were pregnant and we were excited about that but we wanted to keep it quiet because we had two miscarriages before,” the mother-of-four said.

Maria described the relief she felt upon hearing her first-born son’s cry.

“Noah was the first to be born, he came out and we heard a gurgly cry and we were so delighted because we didn’t expect to hear anything with him being so early.”

However, Maria recalled the fear that came over her upon the arrival of Alex and Reece.

“Alex came out and he was pink and limp so he needed help breathing. When Reece came out he was very pale, blue and limp. It was quite scary, you’re just so worried about them.”

All three babies were taken to the Intensive Care Unit (ICU) at Coombe Women and Infants Hospital in Dublin.

The triplets then one by one, when fit to leave, were transferred to Altnaglevin Hospital in December 2019 and have since returned to the family home in Strabane.

Maria, Brian and Mia are now adjusting to life with six under their roof.

“There has been so many lows, but you see them fighting every day and reaching new milestones like taking a bottle, getting promoted to a cot and all them wee things.

“They’re so small, but mean so much,” Maria said.