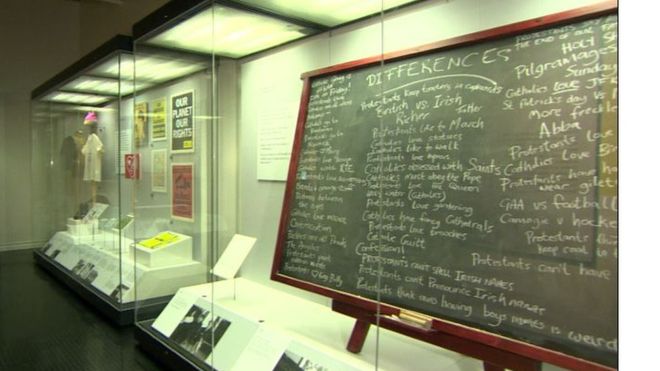 The ‘blackboard’ scene from series two of the hit Channel 4 comedy Derry Girls was one of the standout TV moments of 2019.

When Erin, Orla, Clare, Michelle and James go on a cross-community trip, they find there is more that divides Protestants and Catholics than unites them.

Now the blackboard satire is at the centre of a new exhibition at the Ulster Museum in Belfast.

Culture Lab: Don’t Believe the Stereotype aims to show that history and identities in Northern Ireland are more complicated than they might appear.

And the blackboard in Derry Girls – where Protestants put toasters in the cupboard and Catholics love statues – is a good place to start, according to the chief executive of National Museums Northern Ireland, Kathryn Thomson.

“We want people to come in and we want them to have fun,” she said.

“It’s a good-humoured exhibition and we’re doing it in a slightly different way, but it is also provocative.

“We hope that people will come together and they will have conversations and in doing so, it’ll help to challenge their own perceptions and their own ideas around identity and culture here.”

Historical artefacts displayed as part of the exhibition show that our past is also a tangled web.

A Gaelic League Irish language banner from west Belfast, for instance, is displayed alongside an Orange sash from a lodge on the Falls Road.

But there are also a number of more recent exhibits which show that Northern Ireland is not just “orange and green”.

The Nerve Centre in Derry helped to create the exhibition. 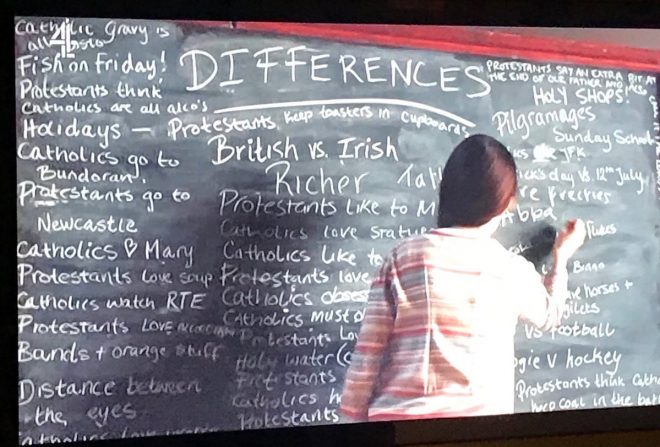 Project manager Niall Kerr collected the experiences and stories of local people, which also feature at the museum.

“What’s coming through from this project is that people are moving away from traditional stereotypes or identifying as either Catholic or Protestant,” he said.

“In the society that we live in, this programme is all about bringing Protestants and Catholics together to engage them around issues of our past and our culture and identity.

There is, though, a tongue-in-cheek quiz visitors can take to tell them which religious stereotype they fit.

Culture Lab: Don’t Believe the Stereotype runs at the Ulster Museum until November.