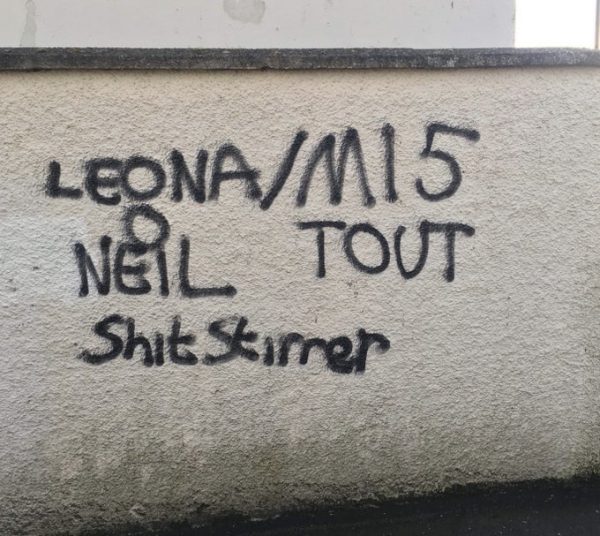 The graffiti was daubed on a wall in Creggan yesterday.

It follows the journalist’s coverage of the involvement of the political wing of the New IRA, Saoradh, in last weekend’s Bloody Sunday march in the city.

The involvement of dissident republicans in the parade has sparked a row in the city, nine months after the New IRA murder journalist Lyra McKee in Creggan.

Some believe Saoradh should have played no part in the rally to commemorate the 14 people murdered by British soldiers on Bloody Sunday 48 years ago.

But organisers said the march was a public rally and no one was excluded from taking part.

Condemning the graffiti attack on the Derry reporter, Mr Eastwood said in a statement: “Leona is a tenacious, truth seeking journalist who speaks truth to power and won’t be intimidated by faceless criminals who are trying to silence her.

“Those behind this graffiti are cowards.

“They’re targeting Leona because they’re afraid of her honest and powerful journalism.

“The SDLP has asked for the graffiti to be removed and I would encourage anyone with information about the targeted campaign of harassment that Leona has been forced to endure to come forward to police.”

The journalist tweeted last night that she felt the graffiti posed a “threat to her safety”.

Posting a picture of the graffiti with her tweet, Leona said: “Graffiti about me has gone up in Creggan #Derry.

“I am neither a MI5 tout nor a shit stirrer.

“I am a journalist, working in my city trying to provide for my family.

“I consider this a threat to my safety.

“I call on community leaders to help me get this dangerous slur removed now.”