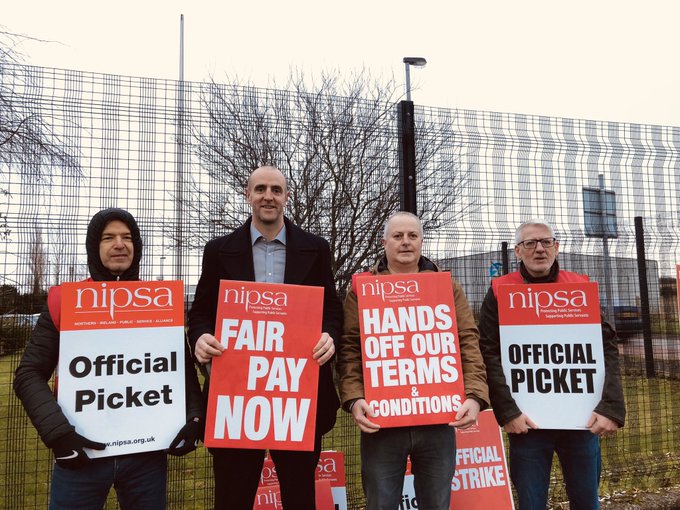 Nipsa members in Derry out on strike over pay row

MEMBERS OF Nipsa in Derry have joined thousands of civil servants across the North of Ireland who are taking part in another strike about pay and working conditions on Friday.

The Northern Ireland Public Service Alliance (Nipsa) said the workers have had a below-inflation pay rise for nine years.

It said members wanted the assembly to treat them with the “same urgency as health workers”.

The action follows a similar strike in July 2019.

In Derry, SDLP Foyle MLA Mark H Durkan joined Nipsa members on strke at Lisahally to show his support for their strike over pay.

On the picket line in central Belfast on Friday, Alison Millar, Nipsa general secretary, said there needs to be “overdue recognition” for civil servants’ “hard work”, particularly during Stormont’s absence.

“This is the executive’s chance to reward civil servants, and they have acknowledged they have kept things running in the absence of a government for the last three years,” she told BBC News NI.

Earlier, Ms Millar said “civil servants were further angered when there was no mention in the “New Decade, New Deal” document of seeking to settle the civil service dispute, yet specific reference was made to the health workers and teachers’ disputes”.

The union met Finance Minister Conor Murphy on Wednesday and said Mr Murphy told them he would press the Treasury for more money for Northern Ireland.

“He reiterated his desire to seek to resolve the dispute and would not drag his heels in seeking a resolution,” said Ms Millar. 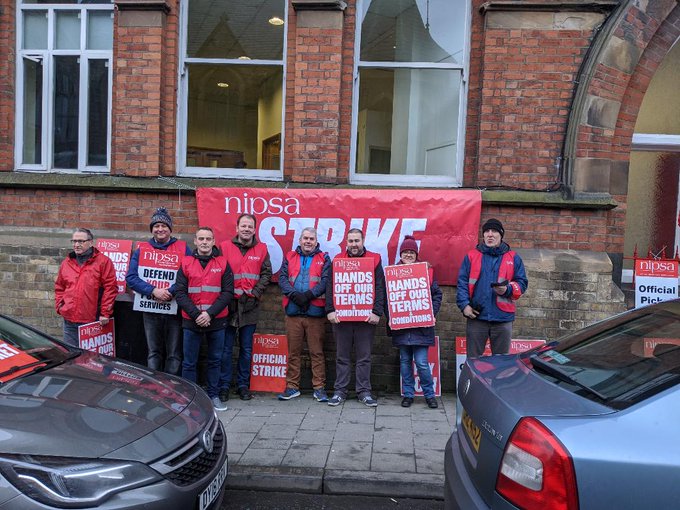 In a statement issued on Thursday afternoon, Mr Murphy said he received a “warm reception” from the Chief Secretary to the Treasury, Rishi Sunak, as they discussed the government’s financial offer to the executive.

Nipsa said it will engage with management at the Department of Finance on Friday “as a first step to resolve the dispute”, but added it would continue action until a resolution was secured “which would be acceptable to members”.

“So we want to hold ministers to account and the assembly to account, to deliver fair pay increases for civil servants.”

During the previous action in July 2019 Stormont’s Department of Finance said the pay rise received by staff was “fair in the context of the challenging financial environment”.

Nipsa members in Derry out on strike over pay row was last modified: January 24th, 2020 by John