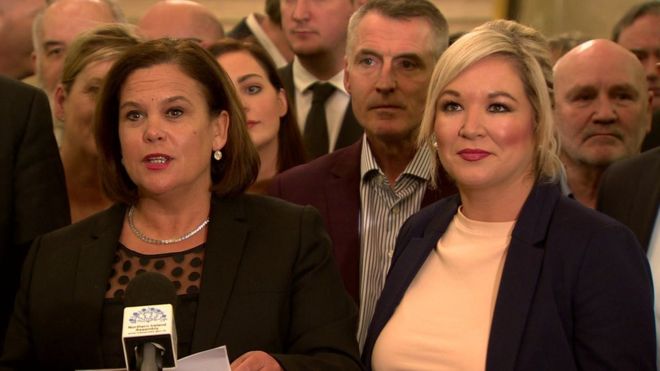 SINN Féin have said they will re-enter devolved government in Northern Ireland after three years of deadlock.

The DUP had earlier also given tentative its support to a draft deal to restore Stormont’s political institutions.

The British and Irish governments published the draft proposals on Thursday, after nine months of talks.

Stormont’s power-sharing coalition, led by the DUP and Sinn Féin, collapsed in January 2017 over the RHI green energy cash-for-ash row.

It is now down to the parties to return to Stormont as soon as possible to restore devolution and sort out a massive list of problems such as roads, health, pay for nurses and health workers, hospital waiting lists, education and policing.

Sinn Féin President Mary Lou McDonald told a Stormont press conference that her party will nominate ministers to an executive.

She said Sinn Féin was up for a return to “genuine power sharing”.

“I believe power sharing can work but that requires everyone to step up.”

“We need to have an inclusive executive.”

The British Secretary of State Julian Smith had asked the Stormont speaker, Robin Newton, to arrange an urgent meeting of the assembly for Friday.

However, on Friday morning, Mr Newton said the Northern Ireland Assembly will only be recalled if the political parties agree on a potential deal to restore power sharing.

Mary Lou McDonald did not comment on the timing the assembly could meet at.

She said there is also not yet a time or date for the executive to meet – but she wanted it to happen as soon as possible.

Mrs McDonald told Irish language activists to “take heart” in what had been agreed.

She said anybody who loves Irish and embraces diversity should regard the deal as positive, adding “this is about a society that makes room for everyone”.

The Sinn Féin president also welcomed measures to deal with the legacy of the Troubles in Northern Ireland and changes to a controversial Stormont’s veto known as the Petition of Concern.

“We now have legislation to deal with legacy cases, which is to be delivered within 100 days, we have reform of the Petition of Concern to try and end its misuse as a veto by one political party,” she said.

“We have key measures to ensure transparency and accountability to prevent corruption and bad practice and to implement the recommendations from the RHI Inquiry.

“We have strategies to tackle poverty and sectarianism and a plan to put objective need at the heart of a programme for government.”

About 9,000 health workers are currently on strike over pay and staffing levels in Northern Ireland.

On Friday Julian Smith said that extra money for workers would be withheld in the absence of a deal.

The health union Unison accused Mr Smith of “holding the people of Northern Ireland to ransom”.

It follows comments he made to the BBC that extra money for workers would be withheld in the absence of a deal.