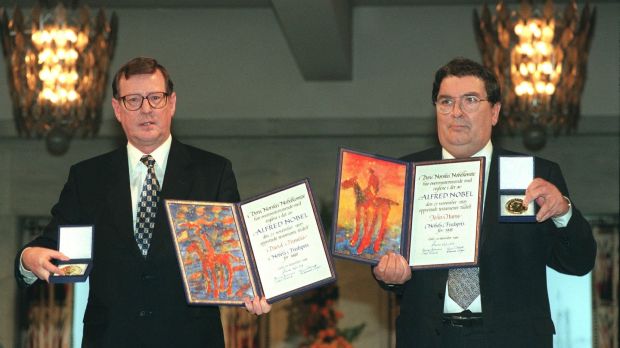 Declassified files on a meeting between British Prime Minister John Major, Mr Trimble and his party colleague Reg Empey on May 13, 1996, show Mr Trimble was suspicious of Mr Hume.

During the meeting, the politicians discussed the possibility of a new IRA ceasefire.

Mr Trimble noted that the “IRA’s American friends” appeared to be turning against them, citing recent critical remarks by congressmen Chris Dodd and Peter King.

The Ulster Unionist leader said he believed that there would be a new IRA ceasefire.

He felt if the ceasefire was “vigorous”, there would be pressure from the SDLP, the Irish government and possibly the US to bring Sinn Féin into talks.

Mr Major said that if there was no ceasefire, the US role in any negotiations would be marginal.

But if there was a ceasefire, they would be heavily involved and would want to see progress.

The prime minister said that anything less than parallel decommissioning would not attract agreement at Westminster or in a future Northern Ireland referendum.

Mr Empey felt that the IRA had no intention of “hanging up their boots”.

He said “if Sinn Féin was not in the negotiations, (John) Hume would hold the key” and would not wish to be helpful.

Mr Major said Mr Hume would be under pressure from the Americans “who no longer took such a starry-eyed view” of the SDLP leader.

Mr Trimble commented that Seamus Mallon’s illness (he took ill at Westminster when he had a prolonged coughing fit while on radio) was unfortunate.

“His style was adversarial but at least straight. Dealing with Hume is like grappling with fog,” the Ulster Unionist leader reportedly said.

Mr Trimble expressed concern about the UUP’s prospects in upcoming elections to the Forum that year due to the decision of the electoral officer to allow Ian Paisley to include his name on the ballot paper.

The UUP leader claimed the move “was a deliberate attempt by the Catholic electoral officer to arrange things so that the SDLP would come top of the polls”. 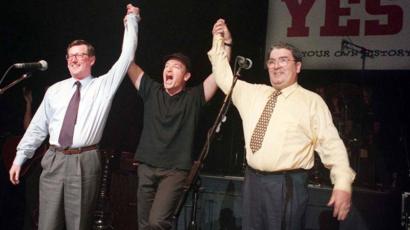 U2 frontman Bono with John Hume and David Trimble

During the meeting, Mr Major said Senator George Mitchell would be the best person to chair peace talks.

Mr Trimble said he had already written to President Clinton asking for assurances about Mr Mitchell, which he would need before agreeing to the senator as chairman. He also said it was vital to get rid of the Anglo-Irish Agreement.

Mr Empey said there were still “great suspicions within the UUP about the American(s)”, particularly around Nancy Soderberg who had previously supported a united Ireland.

However, Mr Major said there was no possibility of Irish unity.

In a later note, a senior civil servant said Mr Hume had rung Downing Street that day “asking why Trimble had had two meetings with the PM when he had not been able to get one”.