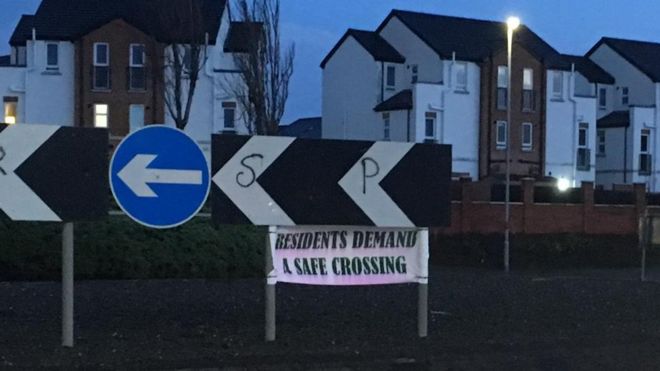 Children’s lives ‘at risk’ amid road safety fears in Derry

CONCERNED residents of two Derry estates say a lack of proper crossings across one of the city’s busiest roads is putting lives at risk.

Hundreds of families live in Clon Elagh and Glenabbey on either side of the Skeoge Link dual carriageway.

The road has no controlled crossings and some residents fear it is only a matter of time until someone is killed.

The Department for Infrastructure (DfI) said a crossing assessment was now being carried out.

Many children cross the busy road every day to catch school busses, which only stop on one side of the road.

“We (community groups) have met a few times, we have held protests here and we have called for road safety measures to be put in place,” she said.

She said traffic lights and a pedestrian crossing were needed in the area.

A DfI spokeswoman said the department was aware of the road safety concerns.

“We have recently undertaken survey work during busy periods and are carrying out an assessment on the need for a controlled pedestrian crossing in the area,” said a department statement.

“When the assessment process has been completed a decision will be made on whether a new controlled crossing point will be provided.”

Planning powers were passed from central government to local councils under a reorganisation of local government in Northern Ireland in 2015.

Previously, planning was the responsibility of Stormont’s Department of Environment.

A Derry City and Strabane district council spokeswoman said the original plans for housing in the Skeoge area had been approved by the DOE.

“Proposals to include pedestrian crossing points in the concept masterplan for this area was deemed unsuitable by the relevant department because of the nature and status of the Skeoge Link road,” she said.