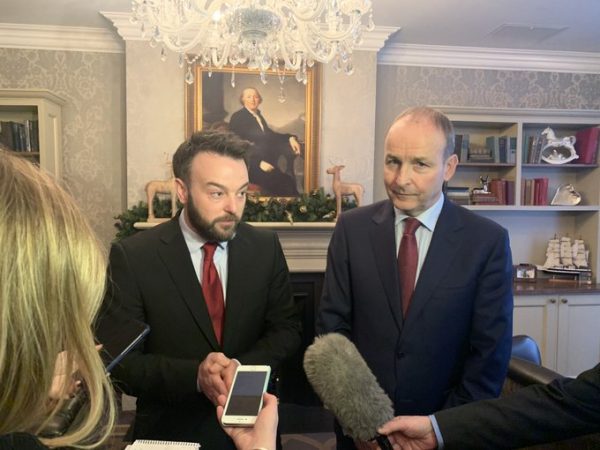 The Foyle constituency is expected to be one of the tightest races at next week’s General Election, as Mr Eastwood challenges Sinn Fein’s Elisha McCallion.

Addressing a business breakfast at the Bishop’s Gate Hotel in the city, Mr Martin said he was happy to be in Derry to support Mr Eastwood.

He described the poll as a “critical election for the future of Northern Ireland”.

Mr Martin said since the last Westminster election in 2017, which saw ten pro-leave DUP MPs, seven Sinn Fein MPs who do not take their seats in the House of Commons and one independent elected, the North of Ireland has “effectively been denied a voice when its future has been at stake”.

“Even worse, one minority view has been allowed to dominate and frankly distort discussions about the fundamental issue of Northern Ireland and Brexit,” he said.

“And of course, for nearly three years the democratic institutions of the peace settlement have been suspended.

“With schools and hospitals left to cope with cutbacks, and all public services under pressure, the people of Northern Ireland have had no route available to them to argue or vote against these cuts.”

Mr Martin also criticised the ongoing collapse of devolved government, blaming both the two governments as well as the largest parties, the DUP and Sinn Fein.

“The policy of the two governments to basically step back from Northern Ireland and give it less attention failed completely, as it was always going to do,” he added.

The Fianna Fail chief praised Mr Eastwood and the SDLP for “being true to the spirit of the founders and leaders of a party which has always been defined by putting the people before politics”.

Mr Martin and Mr Eastwood also took part in meetings with Foyle Port and the Ulster University before canvassing in the city.