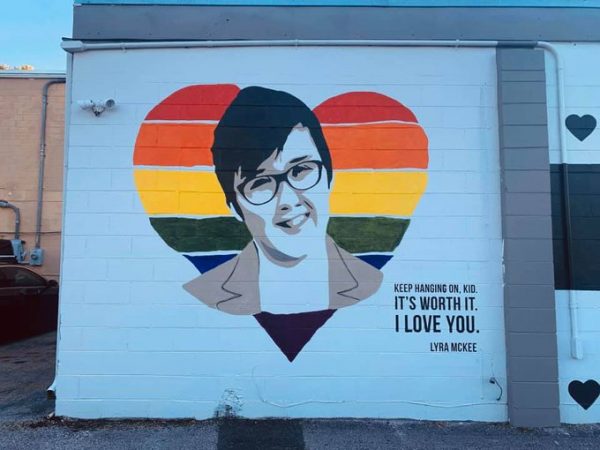 THE family of murdered journalist Lyra McKee said they are “lost for words” after a mural celebrating her life was unveiled in Orlando, Florida.

Lyra’s sister Nichola Corner said the family were “amazed by the powerful message and symbolism” of the mural.

The journalist had travelled to Orlando in the summer of 2017 as part of an international exchange program ‘Exploring American Values’.

The program was run by the World Affairs Council of Central Florida (WACCFL) alongside Cultural Vistas and the U.S Embassy in London.

Executive Director at WACCFL Sarah Gal met Lyra on the trip and said that she “radiated warmth and kindness”.

Following Lyra’s death Mrs Gal proposed a resolution to the City of Orlando to honour her.

When that passed she thought of the mural as a permanent tribute to Lyra.

Lyra had dedicated her TEDx talk at Stormont to the victims of the 2016 Orlando nightclub shooting and all LGBT people who died by suicide.

In June 49 people were killed during the shooting at the gay nightclub Pulse.

“I knew I had to do something to honor her and the amazing life she had,” said Mrs Gal in an interview with Belfast Telegraph reporter Gareth Cross.

She said that the project took a while as she needed to find the right artist, get approval from the city and district and find a building owner to let them use their wall.

The mural shows an image of Lyra inside an LGBT-coloured heart with her message “Keep hanging on kid. It’s worth it. I love you” from her letter to her 14-year-old self.

It is located at Jazzercise Orlando Mills 50 Fitness Centre on N Mills Avenue.

Mrs Gal said the heart was left unpainted by the artist so that people who knew Lyra could “symbolically surround her with love” and paint it with the colours of the LGBT flag.

Lyra’s sister Nichola said that the mural was “absolutely beautiful”.

“It’s a really fitting tribute, it really captures Lyra and what she stood for, love, tolerance, joy and happiness,” she said.

“She really affected so many people in her short life and made so many connections, often in short meetings.

“Tributes like this from the international community demonstrate the level of impact she had. She really touched people’s hearts.

“We are overwhelmed that our wee Lyra is being memorialised in this way in a city like Orlando.

“It’s very rare that I am lost for words, but I was when I saw the mural for the first time.”

She said that the trip to Florida had a “huge effect” on Lyra.

“She thought it was the most colorful place in the world, she felt free to express herself, she didn’t feel the stigma of being different,” Mrs Corner said.

“She really loved it out there, she said that she felt at home and told me that she would love to live there one day.”

Mrs Corner said that she hoped the memorial would serve as a reminder to people of what Lyra stood for and fought for in her life and inspire future generations facing the same challenges.

The 29-year-old writer was shot dead by the New IRA during a riot in the Creggan area of Londonderry in April.

In the wake of her death the City of Orlando passed a resolution in May offering the deepest sympathy of the people of Orlando to Lyra’s partner Sara Canning, family and friends.

Mrs Corner said that a framed copy of the resolution now hangs in her mum’s Belfast home.

The resolution declared a symbolic city-wide day of celebration of Lyra’s life in her honour on her final birthday, March 31 2019.

“In life she was a tireless truth seeker and advocate for equality and social justice for LGBT, forgotten and marginalized peoples around the world, who broke down barriers and reached across boundaries,” the resolution read.

Mrs Gal described the impact that Lyra had on her and others during her trip to Florida.

“What impressed me most about Lyra was that for an investigative journalist who wrote about the effects of war and the legacy of the Troubles, and who as a young girl faced hatred from herself and others for being a lesbian, she exuded nothing but love, kindness, and hope.

“I really admired that and so much more about her. I am so grateful I had the opportunity to meet Lyra and feel privileged that she called me her friend.

“She has strengthened my resolve to keep working in the exchange field. To keep facilitating those ‘uncomfortable conversations’.

“She has motivated me to become a better advocate for equality and social justice for LGBT and marginalized people.”