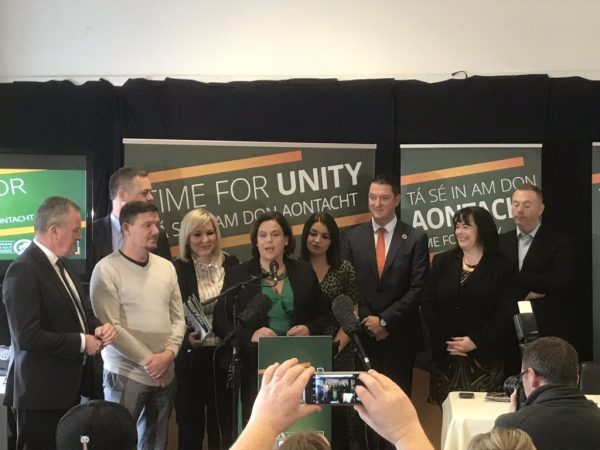 Sinn Fein launch its manifesto in Derry on Monday

SINN Fein’s voice is being heard “loud and clear” despite pledging not to take its Westminster seats, the party leader said.

Mary Lou McDonald said it was the election of a generation due to the challenge posed to Northern Ireland by Brexit, but rejected criticism of her abstentionist policy.

SDLP leader Colum Eastwood is bidding to wrestled the Foyle seat back from Sinn Fein in Derry and has vowed to go into the House of Commons and press for a second referendum if he wins the close-fought Foyle seat.

Ms McDonald launched her party’s manifesto in the city on Monday.

She said: “The farce of a notion that you go into the house of chaos at Westminster and even your wits with Jacob Rees-Mogg as he reclines on the green benches and snoozes off is fanciful. 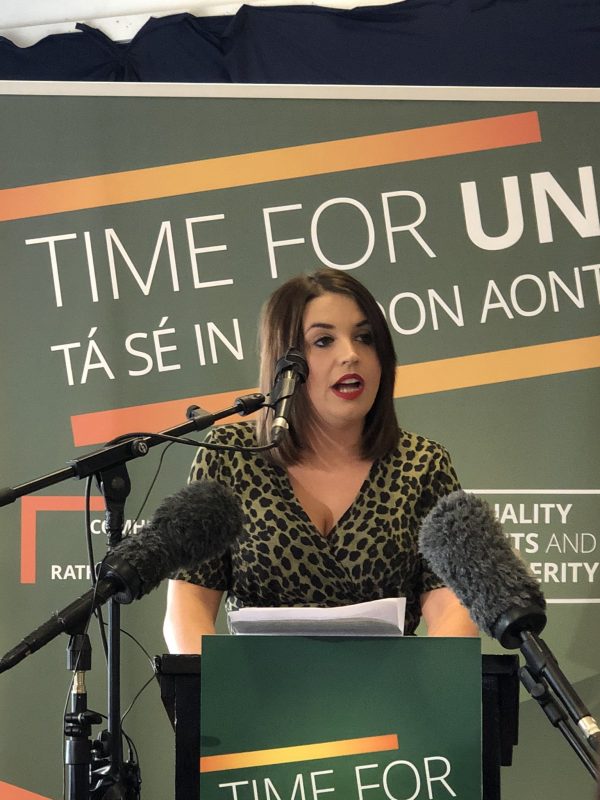 “It is also a little dishonest – I don’t think we should be misleading people in this election because the stakes are very high.”

Ms McDonald argued her party’s “relentless representation” had been heard in Dublin, Brussels and Washington DC and helped inform the EU’s negotiating stance on Brexit.

“The voice of the north has been heard loud and clear, never more loudly I would say, not only heard it has been heeded, it has been acted on.”

Many unionists argue that those who voted against Brexit did not vote for a united Ireland.

Unionism is united in opposition to extra customs regulations between Northern Ireland and the rest of the UK due to the departure from the EU, the DUP said at its manifesto launch last week.

Sinn Fein has sought to characterise its rivals as architects of Brexit.

It is running John Finucane, the son of murdered solicitor Pat Finucane, in North Belfast against DUP deputy leader Nigel Dodds in a tight race.

Ms McDonald said the unionist party’s former leader at Westminster had pushed his “crazy” Brexit agenda as a badge of honour.

She claimed Irish MPs could not go into Westminster and stop Brexit, pointing to the DUP’s record.

Ms McDonald said: “That matter has been decided by the English public and will be decided and shaped in the first instance by their elected representatives.”

The DUP had an arrangement to support the minority Conservative Government in key votes but helped thwart Theresa May’s efforts to push her proposed Brexit deal with the EU through Westminster over concerns about the Irish border backstop.

The party is opposed to Boris Johnson’s proposed plan, which the Prime Minister argues would scrap the backstop.

It would impose extra regulation on trade between Great Britain and Northern Ireland to prevent a hard land border on the island with an EU country, the Republic of Ireland.

The Sinn Fein president said Brexit has had the effect of uniting improbable allies amid “real threats” to people’s livelihoods.

“In the face of that threat we have come together, set aside very significant political differences and said in this election it is important that people use and lend and borrow votes from others to ensure that – loud and clear again – it is heard that the north has not consented to Brexit.

“We insist that our island and communities are protected.”